WEC-Congo was selected as a winner, in 2018, of a joint W4-Girls Not Brides call for innovative, high-impact projects to end child marriage in local communities in Sub-Saharan Africa.

W4 sat down with the WEC-Congo team to discuss their work with local communities in the North and South Kivu region in the Democratic Republic of Congo (DRC) and how their programs to end child marriage are bringing about positive, lasting change. 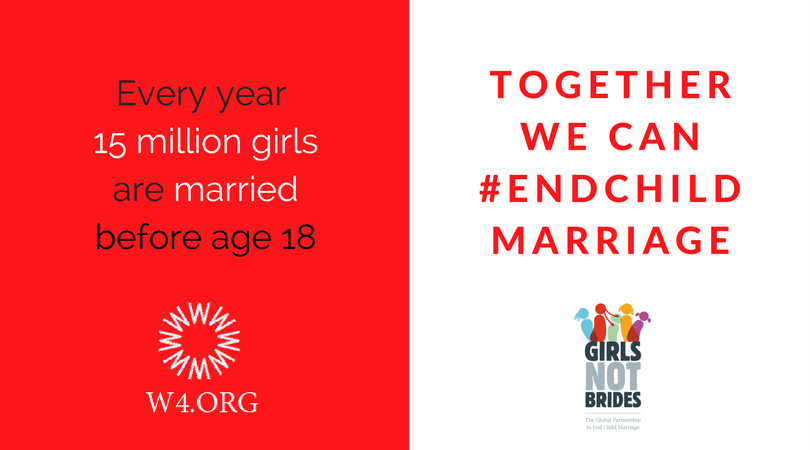 What inspired you to found WEC-Congo?

Inequality between men and women in DRC, the ongoing ravages of war and conflict (which disproportionately affect girls and women), the manifold injustices that women face in their daily lives, the despair of countless abandoned or orphaned girls, the widespread lack of respect for and abuse of girls and women in familial, school or professional environments—these are some of the problems that prompted our passionate team at WEC-Congo (“Women for Equal Chances-Congo”) to create an organization to protect girls’ and women’s human rights. Our overall goal is to foster a fair, safe & prosperous society in DRC, based on equality of opportunity for men and women, and boys and girls.

Please tell us about your programs and what makes them so effective.

The power of community

Our team has developed an innovative, holistic and high-impact program that mobilizes all members of the community (key “stakeholders”) to raise awareness about the harms of child marriage, to propose solutions and act collectively to bring about lasting change.

We focus on educating local authorities and community leaders about national and international laws that prohibit child marriage. We also support campaigns in schools, churches and other public spaces, as well as in the media, such as through radio shows, to raise awareness about the harms and repercussions of child marriage. In addition, we encourage parents and local authorities to be involved in the rehabilitation and socio-economic reintegration of women and child survivors of early and child marriage. In order to promote lasting change, WEC-Congo has established Mutual Savings & Credit Funds to support families and help alleviate poverty, which is one of the primary underlying causes of early marriage. 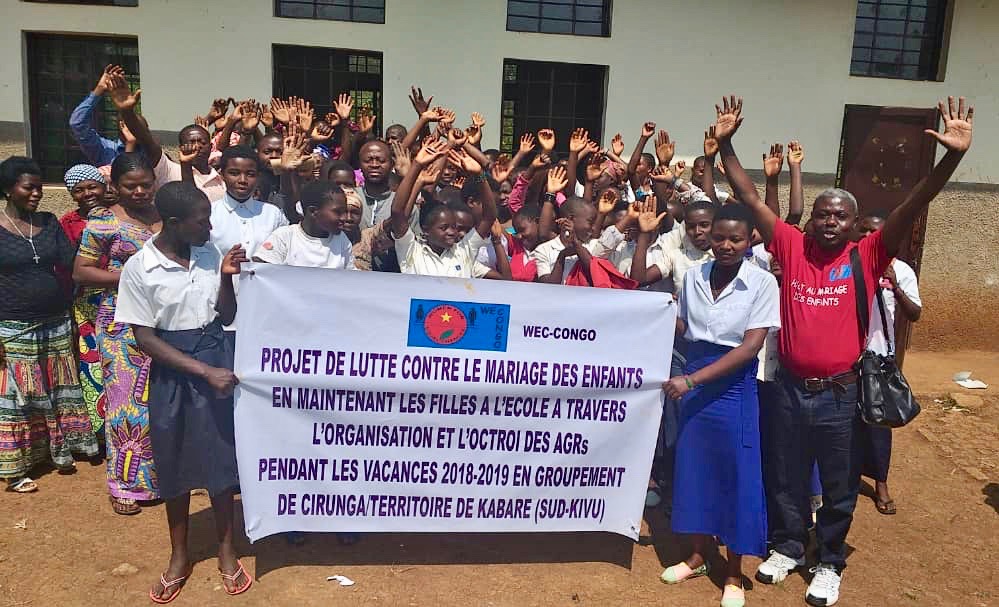 The aim of our awareness-raising workshops and campaigns is to foster widespread local support and obtain a formal pledge from the community to put an end to this harmful practice. While laws against early marriage do exist, a great problem is weak law enforcement (often owing to corruption): the authorities responsible for implementing the law fail to prosecute the perpetrators. We know that we have to mobilize the entire community. People come to our awareness-raising workshops from an array of backgrounds: village chiefs, religious leaders (priests, pastors, imams), school teachers and principals, community organizations dedicated to protecting girls’ and women’s rights, public sector officials and representatives (social services, the civil registrar, the ministry of gender equality, child development and family welfare), representatives of children’s parliament, commanding police officers, community radio journalists and, of course, women and girl survivors of early marriage. 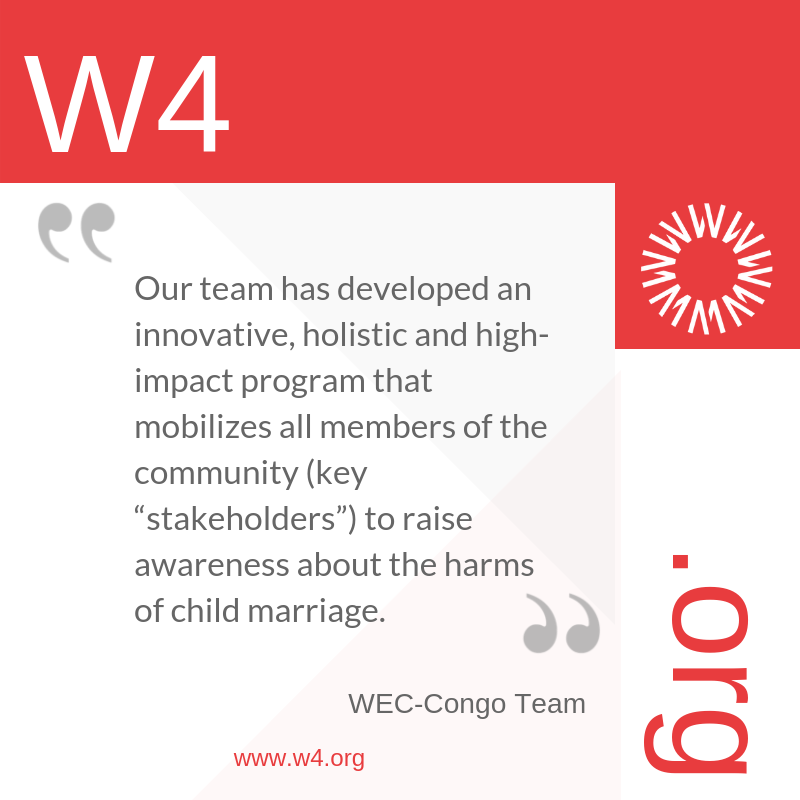 The workshops’ content is based on the African Charter on the Rights and Welfare of the Child, the 2009 Law on Child Protection in DRC, and the penal code. The Charter recognizes that “the child occupies a unique and privileged position in African society, and for the full and harmonious development of their personality, the child should grow up in a familial environment, in an atmosphere of happiness, love and understanding.” The 2009 law stipulates that all practices, traditions and customs that are detrimental to the development and health of a child, or jeopardize the life of a child, are strictly prohibited—and it specifically prohibits (in articles 48 and 49) the engagement and marriage of children. Finally, the penal code specifies that forced marriage is a punishable offence, with perpetrators subject to a penalty of 12 months to 12 years imprisonment and a minimum fine of 100,000 Congolese francs. This penalty is doubled in the case of the forced marriage of a person under the age of 18.

In addition to advocacy and awareness-raising, WEC-Congo conducts vocational skills-training programs for women from poor communities. After taking part in these programs (offering courses in artisanal crafts, for example), the women can set up income-generating activities and earn their own living. By acquiring financial independence, they are able to better protect themselves against early marriage and its harms, which include: the health risks (which can be fatal) of early pregnancy; domestic abuse; husbands who prohibit them from continuing their education; husbands who abandon them; prostitution; sexual abuse and violence. The women achieve a decent standard of living and have the means to provide for their children: this creates a virtuous cycle, which helps to put an end to forced and early marriage. 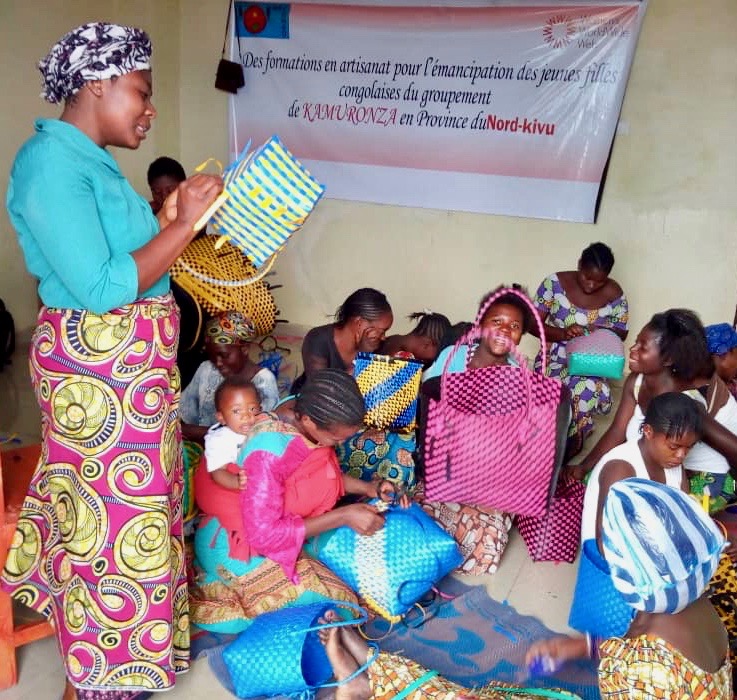 Child marriage has long been perpetuated by local customs, traditions and entrenched beliefs: for example, many parents believe that early marriage will protect their daughters from the harms of sexual violence and prostitution, and favor it as a way of avoiding out-of-wedlock pregnancies. Thanks to our work, local communities are becoming aware of the dangers of child/early and forced marriage and of the positive consequences, for the entire community, of putting an end to it. 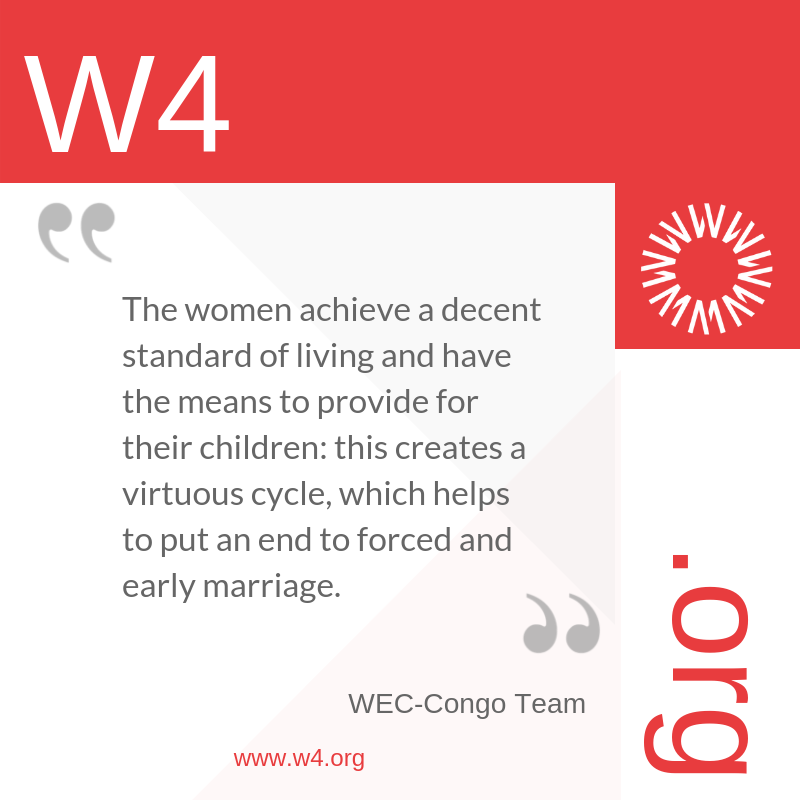 Our team’s activities are rooted in local communities, carried out in collaboration with local community authorities and leaders, and welcomed and appreciated by the community members. WEC-Congo founded the Local Committee for the Protection of Human Rights, which has come to be a highly respected organization: members of local communities will consult the committee if they witness human rights violations. Our team is proud to say that many people—women and men, girls and boys—have been positively impacted by our work and are glad to be part of the profound social change that is underway.

Find out how you can support this project: Income-Generating Training for Young Congolese Women in North Kivu