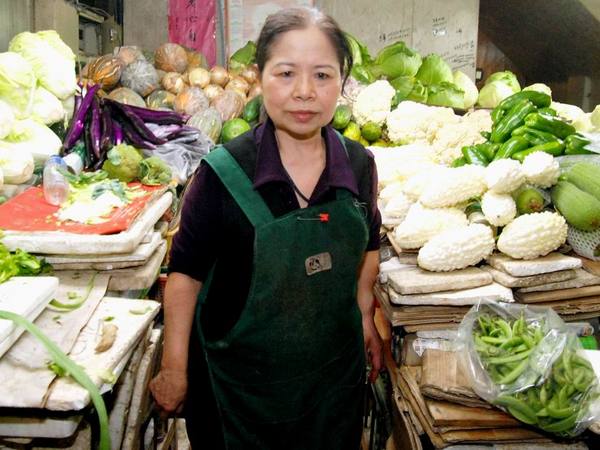 At three o’clock each morning, Chen Shu-Chu rises to prepare for work.  As a seller of vegetables in Taitung Central Market in Eastern Taiwan, Chen’s income is modest.  But, out of her income, she has managed to donate over NT$ 10 million ($320,000) to charitable causes, including $32,000 to a children’s fund, $144,000 to help build a library at her local elementary school, and another $31,000 to the Kids Alive International Orphanage, where she also gives individual financial support to three children.

Recognizing her amazing contributions to local charities, TIME Magazine named 59-year-old Chen one of the most influential people of 2010.  “Money serves its purpose,” Chen told the Chinese newspaper Southern Metropolis Weekly, “Only when it is used for those who need it.”

Chen learned to sell vegetables when she was thirteen years old.  After the death of her mother, she began working alongside her father to help support a family of seven.  Having attended elementary school, she was obliged to abandon further studies.  Since then, she has accumulated the funds for her charitable gifts by living frugally and working eighteen-hour days. Rather than dwelling on her own sacrifices and generosity, Chen’s mind is always gratefully turned towards others. A familiar figure at the market, where she has worked for nearly half a century, she emphasizes: “I want to thank the Taitung people. If you did not allow me to earn money, I would not be able to do what I have done today.” This year, she is planning to establish a fund to help provide education, food and health care to the very poor.

“The TIME 100 is not about the influence of power but the power of influence,” writes Richard Stengel, editor of TIME Magazine. Chen’s remarkably generous giving has already set off a trend, encouraging others of modest means to donate to charity. “Chen is like a seed,” said Phyllis Weng, a senior social worker at the Taiwan Fund for Children and Families. “[Her actions have] taken deep root in the hearts of many people. Her influence will be far-reaching.”

Women’s WorldWide Web wishes to honor Chen Shu-Chu and the gift of her quiet, far-reaching actions, especially the great gift of her inspiration to others.