App-Elles: An Innovative Mobile App that Combats Violence Against Women

W4 had the pleasure of interviewing artist and women’s rights activist Diariata N’Diaye who is the pioneering founder of Resonantes, a visionary organization that is breaking new ground in combating gender violence. 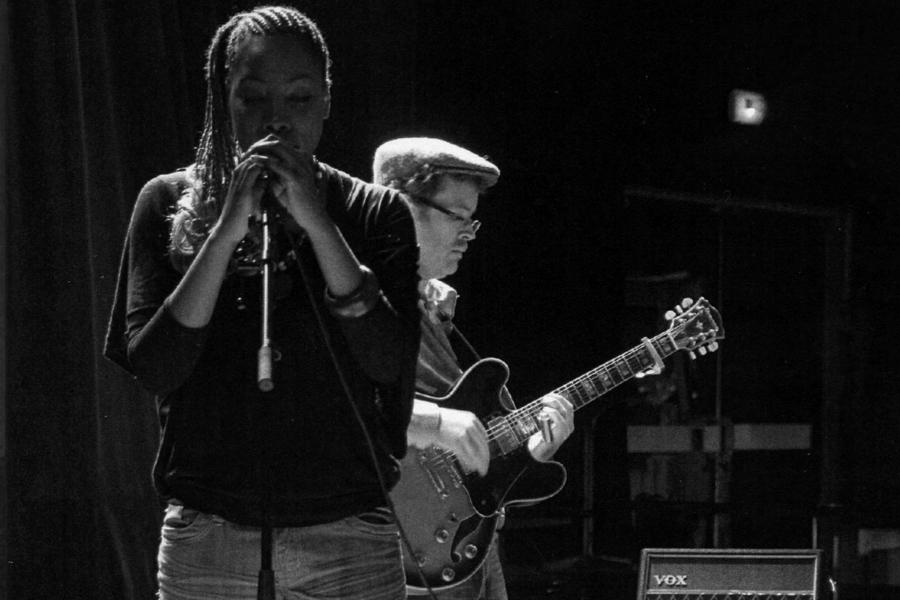 What inspired you to create Resonantes?

I am an artist, a Slam Poet, and I wanted to use my talent as a performer to combat violence against women. I created “Mots pour Maux” (a play on words, meaning “word for word” and “words for pain”) in partnership with the General Council of Seine St. Denis’ Observatory for Violence against Women. The show has already been performed nearly 200 times for middle and high school students: for years, I have been traveling to schools to educate young people about these issues. My program is divided into three parts: my performance; a debate with the public; and, finally, writing workshops. In these workshops we address the topic of violence: young girls and boys, who have been the direct victims or witnesses of violence, take this opportunity to speak about their experiences, often for the first time. I was shocked when I discovered that in many cases I was the first person to ever speak to these young people about violence, and the first person they had trusted to share their experience. I began to feel overwhelmed by the number of students who confided in me and I realized that a lot of young people ultimately don’t even know how to define violence. However, when you explain what violence is, they quickly realize that they have been victims, or even perpetrators, of violence. When I saw this, I felt that I had to do something. I started by connecting students with organizations and institutions that could help them. But I realized that a huge amount remained to be done, from raising awareness to providing access to information. So I created Resonantes, which provides tools for those facing violence, those who don’t have access to necessary information and aren’t generally targeted by awareness campaigns. 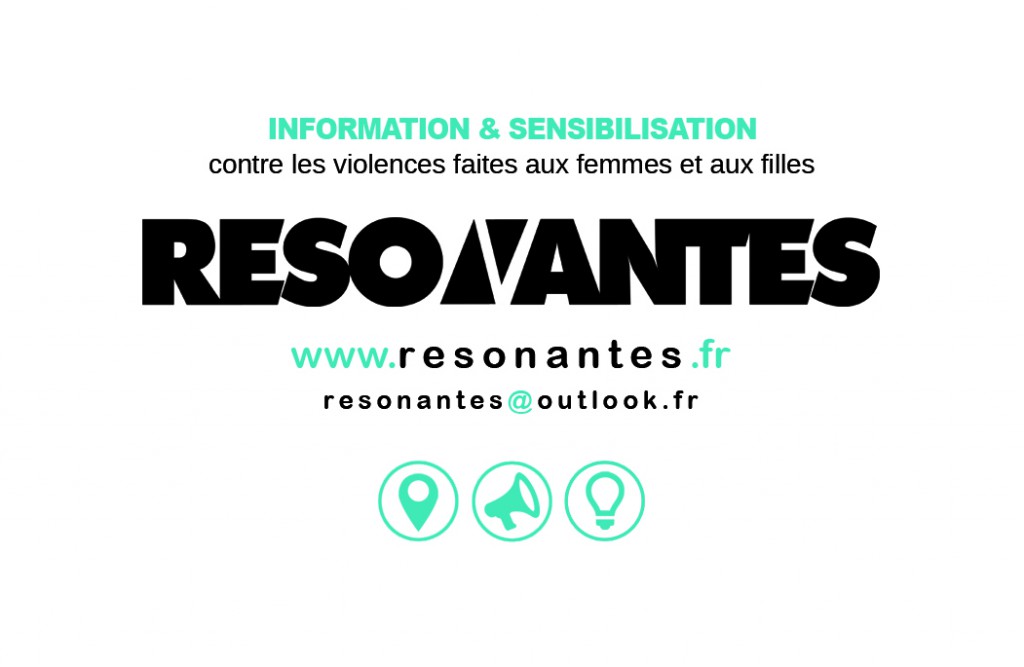 Can you tell us about the different services offered by Resonantes?

Resonantes provides a space to reflect and to find new ways to address, and provide access to information about, violence. The idea is to talk about violence without making it depressing. The topic is difficult enough as it is! We seek to create tools for this particular audience. One of these tools is my show, which gets people passionately engaged. Cultural performances can reach a wide range of people and this show is a very appropriate tool for our audience as it helps to get the conversation flowing. The writing workshops are also essential. They allow participants to take a stand, to write and speak about the violence they have suffered or witnessed.

The information on Resonantes.fr is presented in a simple, visual, and straight-to-the-point manner. We share information on violence, provide examples, and show videos. We aim to bring together all the associations, institutions and tools available for victims of violence. It’s essential to make it as easy as possible for victims to find what they need, especially considering how difficult it is for victims to speak out and seek help. We want people to be able to say, “I can find the answer to every question I have about violence on this website.” 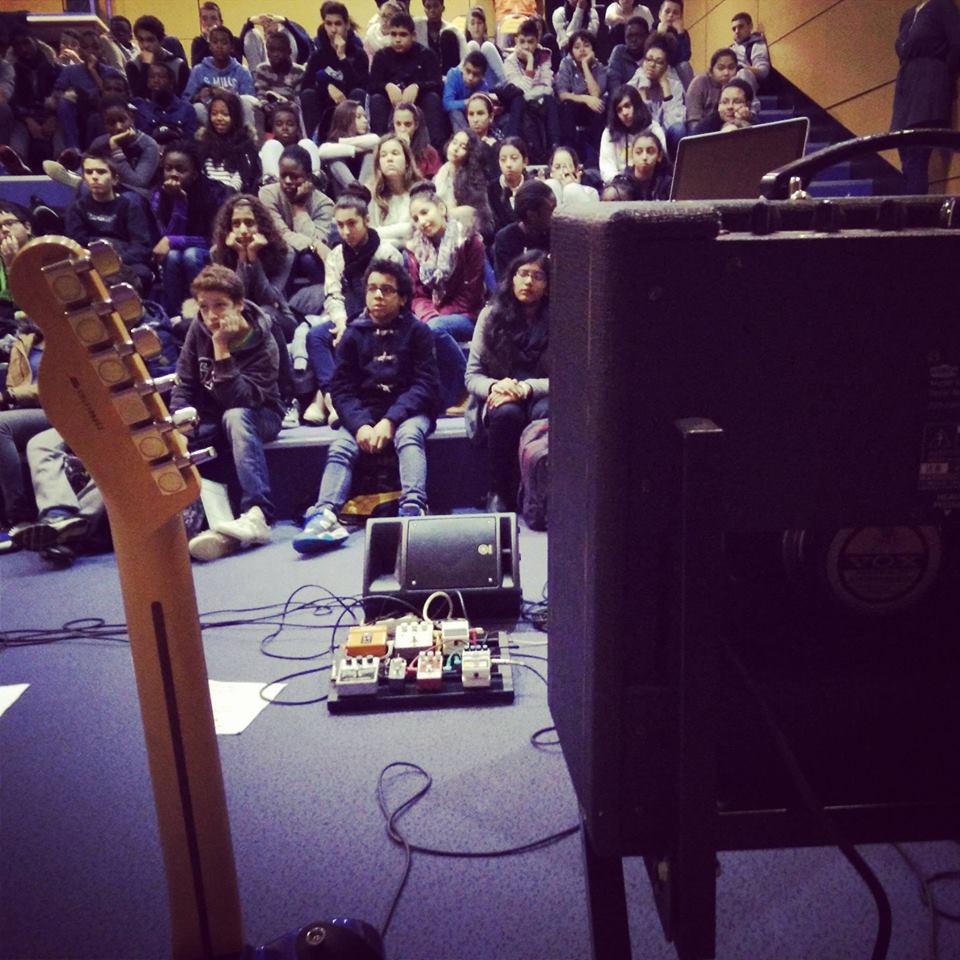 Congratulations on your mobile application, App-Elles, which gives women and girls access to alerts if they experience violence. How do you measure the impact of this mobile app?

App-Elles was created in February 2016, to respond to the needs observed in the field, especially the victims’ need to be able to call their families, emergency services, and other professionals for help.

Our findings were simple: if you ask anyone on the street to give you the names of the associations and professionals in their area that help victims of violence, they won’t know the answer. Those most well informed are the professionals themselves — but they’re the ones who least need help!

I think it’s a little early to be able to measure the true impact of the app, especially since I want to develop it further. Right now, the app is available only on Android, but it will be released for iPhones soon. Also, we’re adding new features to make it even more comprehensive. Once all the relevant organizations have been listed on the app, they will be able to conduct an evaluation themselves.

I know we are moving in the right direction. I already get a lot of messages on social media from victims of violence who write to thank me for creating the app because they feel safer and believe that App-Elles really meets their needs. That is already amazing! 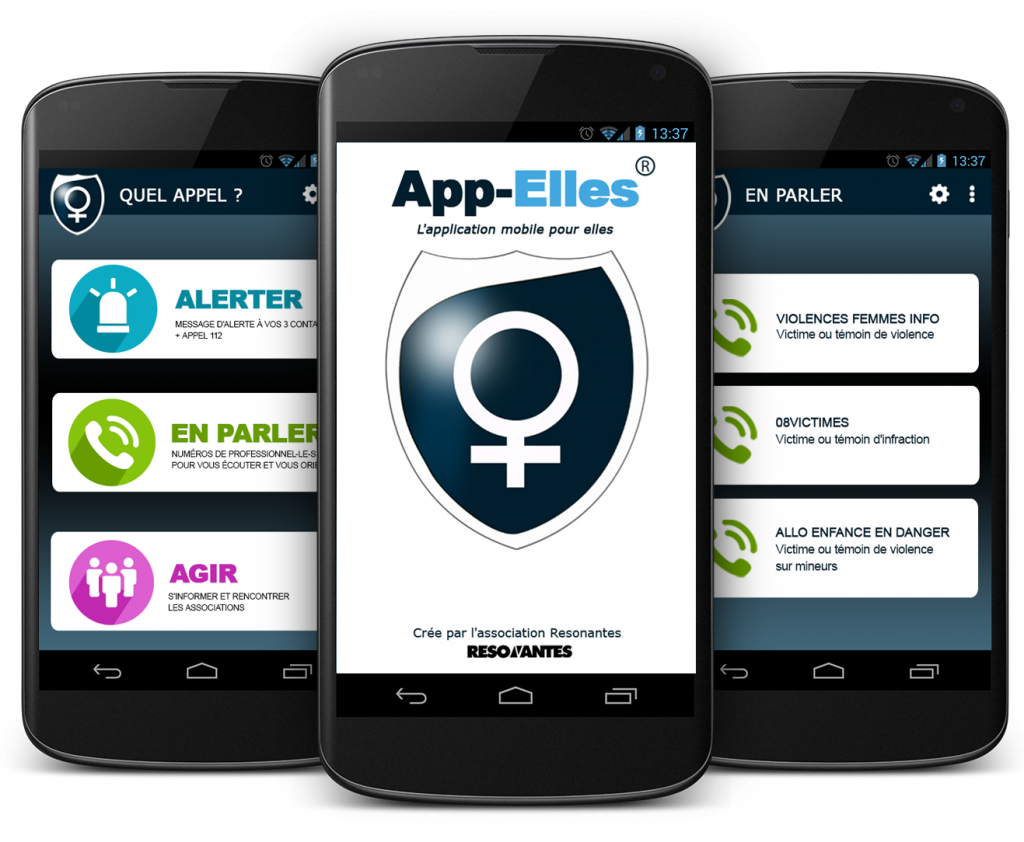 App-Elles provides an excellent example of how digital technologies can be used to protect women victims of violence. In what other ways can digital technology help to combat violence against women?

The need to create a mobile app struck me as obvious because everyone has a mobile phone. The best way to combat violence, therefore, was to get inside the phones. Digital technology wasn’t really my thing, but I used it to reach the maximum number of people. And I’ve noticed that other applications are beginning to emerge. I don’t know what technologies we will have access to tomorrow, or how we will be able to use them to continue the fight. But one thing is certain: there is still much to be done with digital technologies, which have become an integral part of our daily lives. And I trust the people engaged in this fight. Digital technologies are going to help advance the fight to end violence against women. 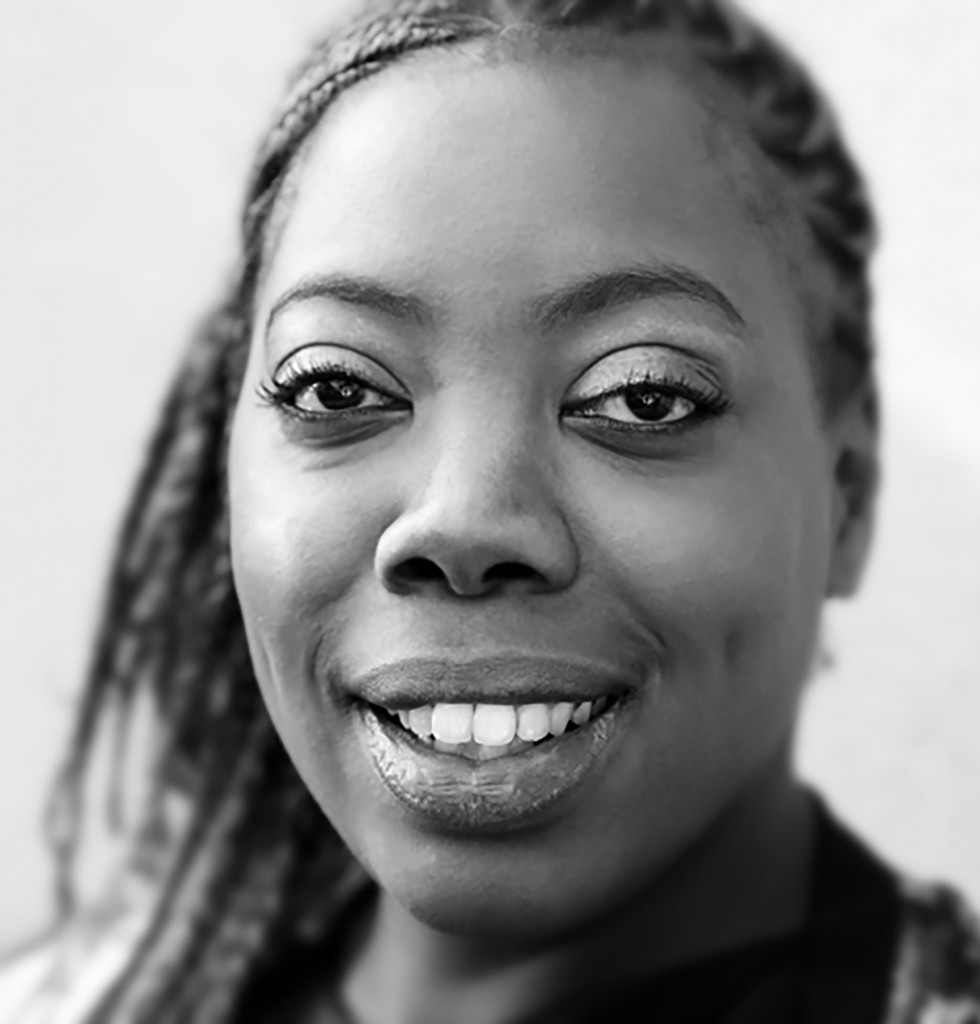 I believe we have to start by educating and raising awareness from a young age because, as we know, the perpetrators of violence are often former victims of violence. It is a vicious cycle. I see the number of young people I have educated through slam poetry; I see the impact it has had, not only on victims but also on perpetrators. If no one tells someone that grabbing a girl’s bottom isn’t a game, then it will keep happening. For me, it is a question of educating the entire population, while caring for and supporting victims as early as possible, so they suffer as little as possible and can avoid becoming perpetrators themselves. 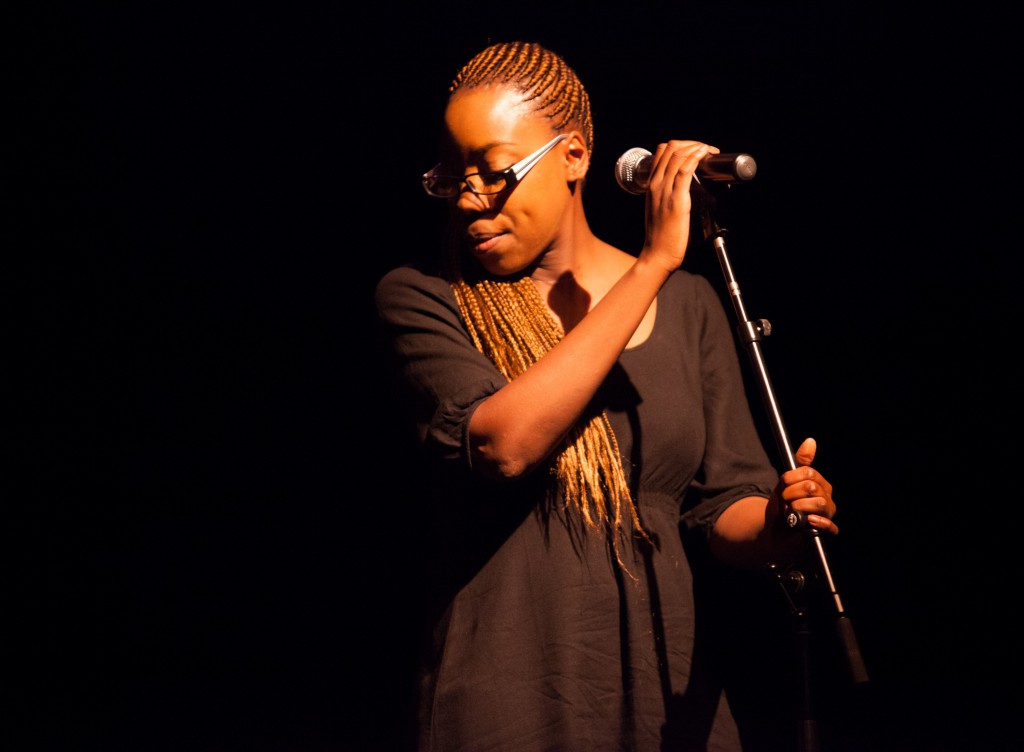 What are your aspirations for Resonantes, now and in the future?

We are creating a long-term structure, and focusing on creating, developing, and distributing tools. We want to generate national and international campaigns for our targeted audience (15-24 year olds). We want all smartphone users to have App-Elles on their phone. App-Elles isn’t only for women and girls who have been the victims of violence, but for everyone — family members, friends, witnesses, neighbors, etc. — who can then become a resource for victims of violence. App-Elles gives access to all the information one needs to help one’s girlfriend, boyfriend, friend, mother, neighbor, etc. Resonantes is creating real, effective structures where young people — and the professionals who serve our audience — can obtain information on the tools and resources available, and where they can access the tools we have created. We have also been thinking about creating board games, even video games, etc. There is so much to do — we have a ton of projects for Resonantes.

How can individuals support your work?

By sharing the tools and resources that exist, and by supporting us financially. Our ambition is to provide all of Resonantes’ services and activities free of charge.

I believe we will succeed in reducing violence against women and girls. Things are moving forward, and together we will get there! There are many people engaged in this fight, which is reassuring. We are not alone. Even if victims feel like they are alone, they are not! We all stand together with the victims of gender-based violence.