From ‘A Brighter Dawn for African Women’, by Gcina Mhlophe 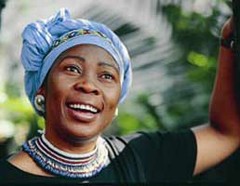 Women’s Worldwide Web pays tribute to Gcina Mhlophe—celebrated South African poet, director, actress, storyteller, activist, and woman of Africa. Mhlophe has long been honored throughout South Africa, and internationally, for her stunningly eloquent manipulation of words and her transformation of language into a powerful vehicle for education and intercultural understanding.

After touring throughout Europe and North America in the 1980s, acting in numerous plays, Mhlophe harnessed her literary talents to write  her autobiographical play, Have You Seen Zandile?  This work has been recognized at countless international festivals and is now part of the curriculum at several South African universities. Mhlophe has since published three more plays and three children’s books. The English version of one of her books, The Snake with Seven Heads, can be found in every school library in South Africa.

In 1990, Mhlophe was elected as an Ashoka Fellow—a title given to the world’s leading social entrepreneurs for their innovative work, finding creative ways to respond to society’s greatest challenges. Mhlophe’s election to this esteemed group of inspiring individuals was a commendation of her dedicated efforts to promote storytelling and poetry as powerful tools for literacy. 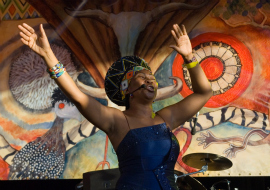 With the goal of protecting the rich indigenous cultural practices of Africa, and thereby enriching the people of Africa, Mhlophe established Zanendaba Storytellers, which adapts the ancient tradition of storytelling to contemporary African society. In the aftermath of Apartheid—the system of legal racial segregation under which ‘non-white’ citizens of South Africa faced blatant and damaging discrimination, resulting in widespread poverty—many South Africans continue to suffer harsh living conditions. Nearly 3.5 million black South Africans have, since 1960, been uprooted from their land, forcing many to prioritize the tasks of finding access to food, water and fuel—thus having to leave by the wayside prized cultural traditions, passed down to them for centuries, simply in order to survive. Zanendaba Storytellers responds to this negative trend by striving to regenerate enthusiasm for the art of storytelling and rendering it accessible to as many South Africans who wish to embrace it.

Zanendaba means, in Zulu, “Bring me a story”—an appropriate name for an organization that creates traveling roadshows and festivals in order to instill in children—and adults—a love and appreciation for reading and education. While its workshops for students and educators focus on how the art of storytelling can be used to further engage young people in their schooling, Zanendaba Storytellers also galvanizes the power of storytelling in order to raise awareness of such crucial issues as HIV/AIDS, domestic violence, human rights, and the importance of encouraging healthy living and safe lifestyles.