We Are All Born Free 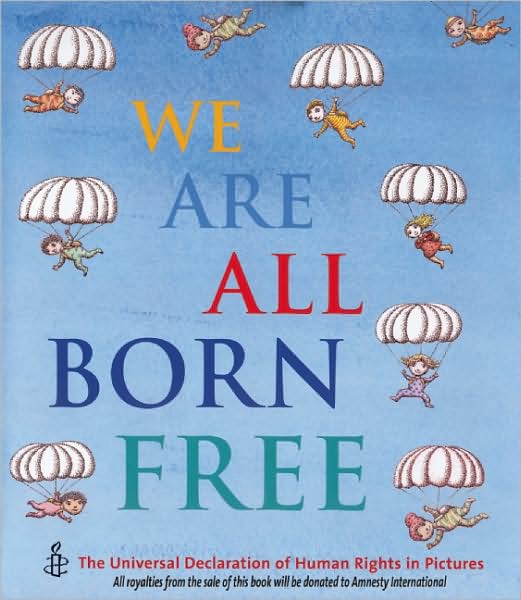 The Universal Declaration of Human Rights was adopted by the United Nations General Assembly on December 10, 1948. Composed in response to the horrors of World War II, the purpose of the declaration was to state and protect the rights of all people, everywhere.

We Are All Born Free is a glorious and original celebration of the Universal Declaration’s spirit. In this beautiful, child-oriented book, each of the thirty articles is rendered in simple prose and brought alive by an image from one of the world’s most talented artists/ illustrators (including John Burningham, Polly Dunbar, Jan Spivey Gilchrist, Hong Sung Dam, Debi Gliori, Axel Scheffler). The book’s images range from the haunting (Jane Ray’s wounded rag doll, illustrating Article 5, here rendered as “Nobody has the right to hurt us or to torture us”) to the deliciously comical (Chris Riddell’s interpretation of Article 28 shows a dinosaur holding up a paper memo—“There must be proper order so we can all enjoy rights and freedoms in our own country and all over the world”—and emitting, in light of the city he has crushed underfoot, a sheepish OOPS!). Most of the illustrations are at once seriously thought-stirring and yet charming. Many are so colourful, dense and story-riddled, even the smallest children can become absorbed by the spirit of the pages, while older children (and adults, for that matter) can dwell on the texts and images together, wondering and asking about those crucial material and spiritual freedoms to which every human is entitled: to live, love, think, work and play, free from injustice and harm.

We Are All Born Free is published by Frances Lincoln in association with Amnesty International, and all royalties will be donated to the organization.

NEWS: The original artwork from We Are All Born Free has been exhibited around the world and is now on display at the Gutman Museum in Tel Aviv, in association with Amnesty Israel’s current campaign to protect women’s rights. Amnesty UK’s director will be speaking at the launch next week. Amnesty Israel says that We Are All Born Free has done more to illuminate the importance of Amnesty’s work there than any other materials in two decades.

Amnesty International is a worldwide movement of people who campaign for internationally recognized human rights. AI has a varied network of members and supporters around the world. At the latest count, there were more than 2.2 million members, supporters and subscribers in over 150 countries and territories in every region of the world. Although they come from many different backgrounds and have widely different political and religious beliefs, they are united by a determination to work for a world where everyone enjoys human rights.

The Meaning of Universal Children’s Day

The horrifying events of World War II compelled national leaders around the world to join together in a passionate discussion about how to protect the safety and dignity of human beings everywhere. This global conversation gave rise to the Universal Declaration of Human Rights, which was adopted by the United Nations (UN) General Assembly in 1948.

Later, recognizing the special vulnerability of children suffering through war, regional conflicts, and an exponential increase in global poverty, world leaders created a special UN charter to safeguard and promote the human rights and welfare of all children, which eventually resulted in the 1989 treaty known as the UN Convention on the Rights of the Child. 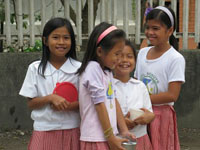 Today, on November 20, 2010, we celebrate Universal Children’s Day: a day dedicated to expressing solidarity with all children, recognizing the continued need to protect children’s rights, and seeking ways to ensure that all children have access to promising futures.

The UN Convention on the Rights of the Child addresses the rights of children and youth under the age of 18. It recognizes their basic human rights and also entitles them to additional rights, in order to protect them from the special harms to which they are, as children, subject. Made up of 54 Articles, the Convention asserts a comprehensive range of rights: from a child’s right to be free from exploitation to a child’s right to his or her own opinion; and encompassing a child’s right to education, health care, and healthy economic opportunity.

In 2008, in honour of Universal Children’s Day, Canadian embassies worldwide collaborated with UNICEF to invite children to participate in a drawing contest on the theme: “Children have rights”. In Uruguay, more than 600 public-schoolchildren joined in the project. In Togo, all participating children received vouchers to buy books and school supplies. Especially among the most underprivileged, this art project helped children to gain confidence as they took part in classes and learned to express their opinions. Children’s parents also had the opportunity to attend conferences on the importance of children’s rights: parents’ involvement is, naturally, critical to the endeavour to ensure that children’s rights are respected.

Today, we invite you to celebrate children and help protect their fundamental rights by participating in events that highlight how important children and young people are to our society.

Things that students and teachers can do: