Maureen McLane is the author of two volumes of poems, Same Life (2008) and the newly released World Enough, as well as a prose study, Romanticism and the Human Sciences: Poetry, Population, and the Discourse of the Species. Formerly the chief poetry critic of the Chicago Tribune, Maureen has written about poetry, fiction, teaching, and sexuality for the Tribune, the New York Times, the Boston Review, and elsewhere, while her poetry has appeared in The New Yorker. She has taught at Harvard and is currently at NYU.

Songs of the Thinking Eye 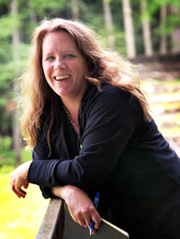 Illuminating a universe of city paths, skyscapes, human hearts, and gardens and galleries both real and imagined, World Enough makes us wonder about who we are and where we are: how do we occupy our space, our time, our skins? How do we know ourselves and connect to one another?

Wry, wise, striking and tender, World Enough is breathtaking in its fullness and reach.

The frizzle-sizzle
ménage: pansies and primulas
gone manic in the aisles
the gardeners monitor
by the Grand Hall
of Evolution—
the names
tell the years
to the custodians
of our archives.
The book of flowers is closed
to those without eyes
for the colors displayed
above the raked dirt.
Root in the ground
though you will it gives nothing
you will not soon care to know.

Between Buffon
and Lamarck a rolling
lawn punctuated
with poppies drinking
the midday, the flagrant
oranges defying
an English rhyme
but not a French. Hybridize
the world let grafting
thrive. Invisible
genitals have plagued us
for centuries but is the remedy
the open show—

Let us conduct
our experiment second
by second on screens
that shimmer forth
the shaved vulvas.
A cabbage black
as a blackened brain
ill-preserved in the cabinet
of a cracked film
scientist: I saw a man
buy one at our local market.
I saw a man
acquire everything
he did not inherit.
I saw the flora gone
faunal springing
forth a monstrous
shrub. I saw us
grasping for names
at every garden’s edge.

from: World Enough, by Maureen McLane.