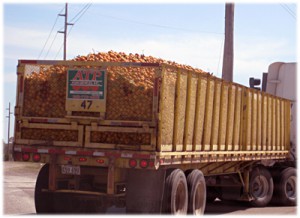 Between twelve and thirteen thousand tons of fruit and vegetables are thrown out each year at New Spitalfields Market in London. And yet 60% of so-called food waste in the UK is in fact considered perfectly fit for consumption.

Enter: Jenny Dawson, the 26-year-old founder of London-based Rubies in the Rubble.  Jenny left her job at a hedge fund to create her own business, making ‘the tastiest chutneys and fruitiest jams in the nicest possible way’. While reducing food waste, Rubies in the Rubble also offers employment to socially and economically disadvantaged women in East London.

“We’re in so much excess of everything that we don’t even bother using half of it,” says Jenny.  “So I decided to put two and two together. I wanted to make my perfect idea of a business – one that truly helps the people who are working within it by building up their confidence.”

Each week, Jenny and her team collect discarded (but edible and tasty!) fruit and vegetables, which they transform into high-quality chutneys, to be sold at their stall in Borough Market, a trendy area of town. The money they make pays for overhead costs and employees’ salaries, while any profits are reinvested into the business.

The women who work with Jenny — her ‘rubies’ — hail from a range of backgrounds; many suffer from low self-esteem and a debilitating lack of social interaction, often the result of long-term unemployment.

“For a long time I was told [my organization] should be a charity,” she says. “[People said] ‘It’ll be much easier for you, you won’t have to worry about making a profit – you can actually just enjoy it.’ But I wanted it to be a company, I wanted it to be for-profit, to be sustainable,” Jenny explains. “I think that sustainable companies can be the answer.”  This is a great idea, especially when charities tend to rely on government or private funding. Moreover, Jenny points out: “Many people in my generation are changing where they want to invest their time … wanting to have something that they’re proud of, and doing a job that they love because it’s where you spend most of your time … I think [business] will become a lot more community-oriented.”

Rubies in the Rubble opened its most recent kitchen on the New Spitalfields market site.  And Jenny has no intention of stopping there: “We’re looking at Birmingham, Glasgow, Copenhagen … I don’t see why it can’t be replicated, so it’s all really exciting!”  More kitchens, less waste.  More opportunities and upward mobility.  Jenny Dawson is changing the world—one jar at a time.