An extraordinary story, inspiring girls across the centuries… 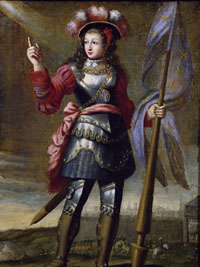 I consider Joan of Arc to be one of the greatest heroines in history. In the fifteenth century, heroism was defined in terms of masculinity, and yet Joan of Arc defied the social rules of her era and fought—literally and figuratively—to change the world around her, becoming one of France’s most revered and beloved figures. Born in Eastern France, the youngest of five children in a farming family, Joan of Arc suffered along with her compatriots during the last phase of the Hundred Years’ War between England and France, witnessing up close the violence and devastation of battle. And, like most of the people around her, she was never given the opportunity to learn to read or write. But she did not allow her status as an illiterate peasant girl to stand in her way. After hearing divine voices, she became inspired to leave home at 16, determined to save her country. Although she was uneducated and many regarded her as a mad visionary, she was a clever strategist and her skills and determination helped her to become the youngest person in all of history to command an army, helping her country to win the freedom it enjoys today. While many details of her life have been mythologized, Joan of Arc has inspired centuries of women to transcend biases against them and believe in their own, real power to change the world.