“My Hands”, by James Navé

My hands have touched so many things. A month before he died, my father told me a story. He leaned over and told me how during the liberation of Europe, he’d stolen a fiddle off a mantel in Germany. He brought that fiddle home to Asheville, North Carolina, and played it for the rest of his life. He taught me how to play the guitar. A Gibson guitar I bought at Dunham’s Music House.

My hands have touched so many things, cracked sidewalks on 31st and Lexington, knock around hats, bills in my wallet, beer glasses at the Bar du Marché in Paris. The sea, the sand, the tides, the lone feather dropped from a wing. I will tell you now. It was a magic feather. I held it up to the light and became a new species, dancing across the edge of time.

I trust the rain and the spirits that slip between the drops. The moon was full the night of the midnight float down the Rio Grande, June, last year. Hundreds of beavers slapped the river with their tails. Shadows shimmered the rocks.

There must be something to silence, sitting in the void making room for my soul in the cashmere of nothingness, bliss, awakening. The rush comes. It is morning. And in the morning, I throw my skin into the air and hold the sun up with my eyes.

My hands have touched so many things: The can opener in the drawer, coffee grounds spilled across the counter, vines on stones, keys dropped on the floor, shoe laces untied, the dirty fork pushed under the plate. The sheets on the beds in the nursing home where I once worked. A thin young man, frame fast as lightning.

My hands have touched so many things. The washcloth I wiped the wrinkled men’s skin with. The pills they took to stay alive. One bite at a time, I fed them, holding the spoon just long enough for them to swallow, bitter or sweet, depending on the day.

My shifted ended at 3 pm. I peddled my racing bike, fast as I could, down Shamrock Drive, gripping the handlebars certain I would never die.

My hands have touched so many things. 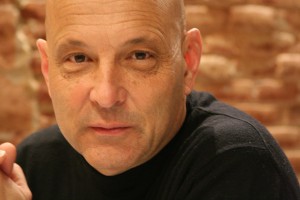 James Navé is a poet of unusual talent and energy. He holds an MFA in poetry and his work has appeared in numerous journals, including the North Carolina Literary Review, Summit Magazine, River Oak Review, Red Wheelbarrow, Tightrope, South Carolina Review, and Poetry Slam Redux.

James is the co-founder of Poetry Alive! and has performed internationally, working in public radio and competing nationally in the Poetry Slam in the United States.

Read more about James Navé and his work.