THIS IS KINDA LIKE HOGWARTS FOR WOMEN IN TECH 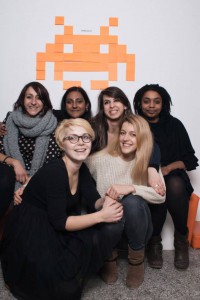 Last September, in a small Parisian suburb called Montreuil, 24 students – made up mostly of women and people from underprivileged families – began a “boot camp.”  Six months later, they emerged as wizards.  Digital wizards!

Simplon.co is a program designed to immerse students into the areas of web design, applications, and digital business and release them into a world of new possibilities.  And while Simplon.co is equal-opportunity, Executive Director Frederic Bardeau recognizes the widely-held Mugglish belief that science and digital technology should be a male-dominated world.  Not so.

Simpcon.co hopes to change the percentages of women in the digital workplace by filling their roster 50/50 for more equal training.

The company also pushes the idea of community, both within the school – where students are encouraged to conjure their own web apps – and locally!  They work hand-in-hand with Girlz In Web and the Fondation Agir Contre l’Excusion, two companies that promote women working their magic in the digital realm and the “Wi-Filles” project which raises awareness in local middle – and high-school where the future technical wizards study.

Currently, Simplon.co is only located in France, but soon you won’t have to find Platform 9 3/4 to attend – Bardeau says he hopes to spawn open source franchises across France and abroad!  And, as Viviane Chaine-Ribiero, President of the Femmes du Numerique Commission, points out: “The digital realm has a lot to offer.  Too few women choose scientific courses, but this is a hiring sector with almost 35,000 job openings each year. It’s THE path to take.”

Simplon.co is the school the three self-taught web-entrepreneurs who founded it wish they had been able to attend when they were younger.  Instead, they’ve conjured their dream into a reality for everyone!