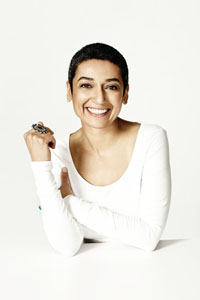 Women’s WorldWide Web is proud to honor Zainab Salbi for her courage, perseverance and creativity in working to change the way the world views and treats women.

Recognizing the need for a grassroots movement to help women survivors of conflict take control of their lives, the Iraqi-born Salbi founded Women for Women International (WfWI) in 1993.  Since then, the organization has helped 271,000 women survivors of war through a program of rights awareness training, vocational skills education and access to income-generating opportunities. WfWI has also distributed more than $89 million in direct aid and micro credit loans, having an impact on more than 1.4 million family members. Today, Women for Women International has chapters in eight conflict and post-conflict areas around the globe, helping women to become leaders of dialogue and change within their communities.

Zainab Salbi has won international recognition (including awards from TIME, Forbes, and the 2010 David Rockefeller Bridging Leadership Award) for her humanitarian work, and has been honored by Former President Bill Clinton for her work in Bosnia and Herzegovina in 1993.

She also believes in the profound and practical power of telling one’s story: “Unless we understand the complexities and the nuances of wars, and unless we know what it means for women, how it impacts women’s lives, we can’t reach the discussions of peace, of sustainability, of development.”  WfWI’s sponsorship program has enabled women from the US and 83 other countries to connect with, financially support and also exchange letters with their “sisters” in war-torn regions. This process helps to document women’s lives and stem the inheritance of loss suffered in conflict-ravaged regions. To date, the program has linked more than 193,000 women survivors of war with sponsors around the world.

A survivor of war herself, Salbi is the author of the deeply moving and eloquent memoir, Between Two Worlds: Escape from Tyranny: Growing Up in the Shadow of Saddam (2005) and The Other Side of War: Women’s Stories of Survival and Hope (2006).