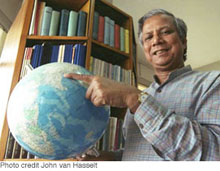 Grameen America opened its doors in January 2008 in the most unexpected of places – in Jackson Heights, a neighborhood in Queens, New York City. In June 2009, a second office opened in Omaha, Nebraska. Although the United States is worlds apart from Bangladesh, the non-profit organization follows the same microfinance model that has been revolutionary in extending credit to people most often excluded from the financial system. It offers low-cost loans, savings programs, and other financial services to the poorest women in the country. Much like its sister organization, Grameen America strongly supports the empowerment and entrepreneurial capacity of women.

Grameen America: the hope of inclusive finance for the poorest women in the United States

The opening of Grameen America is timely. According to U.S. Census figures, the financial crisis plunged 40 million people below the federal poverty line and the majority of them are women. In the U.S., 73 million people–a quarter of the population–are financially underserved, meaning that they do not have access to basic, safe, and affordable banking services. This situation is aggravated by the U.S. credit rating system, which excludes people lacking collateral, education, references, or a banking history. With so few options, people often end up borrowing from moneylenders, such as payday lenders and pawnshops, which charge exorbitant interest rates (an average of 400% annual interest rate).

Grameen America incorporates the same group-lending model used in Bangladesh, based on trust and mutual support: borrowers come together in small groups each week to repay principal and interest. Another key component to the Grameen America lending model is the requirement for savings. Each week, borrowers are required to deposit a minimum of $2 into their savings account, and many borrowers deposit much more than this required minimum.

To date, Grameen America borrowers have savings deposits of over $380,000. This sort of lending model gives borrowers a support network and forum for exchange of experiences, ideas, and business opportunities. Grameen America provides a maximum first time loan of $1,500 enabling poor women to invest in their own businesses, such as bakeries, hair salons, clothes shops, and flower stalls. Crucial capacity-building services, such as training in financial literacy and financial management, are also provided by Grameen America through their weekly meetings.

Microfinance revolution: banking for the poor and women’s empowerment

Muhammad Yunus managed to overcome the injustice of financial exclusion in his home country, Bangladesh—one of the poorest countries in the world. There, Grameen Bank has reached out to millions of people, predominantly women, giving them access to the financial resources and services they need in order to establish sustainable livelihoods and improve their own and their families’ life prospects.

In his 2003 book, Banker to the Poor, Muhammad Yunus says, ‘I never imagined that my micro-lending programme would be the basis for a nationwide “bank for the poor” serving 2.5 million people or that it would be adapted in more than one hundred countries spanning five continents. {..}it did not stop with a few people. Those who borrowed and survived did not let it. And after a while, neither would I.”

In the richest country in the world, Grameen is once again demonstrating that: ‘the real question is not are the people credit-worthy, but are the banks people-worthy?’

Since its opening, Grameen America has reached out to 2,900 borrowers and disbursed over $6 million dollars in microloans, with a repayment rate of over 99%. The organization has ambitious plans for expansion and aims to open offices across the country, to reach out to at least a million people.

Tereza Crespo is originally from Ecuador. Tereza started her own food business in the streets of New York City two and a half years ago. Thanks to a Grameen America loan of $1,500, Tereza was able to purchase a larger cart enabling her to boost her food vending business and improve her income. Tereza is now able to support her three children.

Women’s Worldwide Web salutes the work of Grameen America and invites you to be involved in its groundbreaking work.