“There has been so much injustice and oppression in Iraq, for such a long time. To fight it is almost an obligation.” 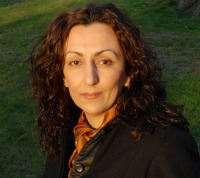 Houzan Mahmoud was born in Iraqi Kurdistan in 1973. As a Kurd living under the regime of Saddam Hussein, she grew up with an intimate understanding of discrimination, injustice, lack of rights, and oppression—and the urgent need to resist them. From the mid 1970s, Houzan’s family was involved in politics and struggle against the dictatorship. “My family was involved in a leftist group called Komalei Ranjdaran. As a child and teenager growing up in a highly political family, the struggle for freedom, equality, social justice and living with dignity were a part of my upbringing.” Houzan did not join any political groups while in Kurdistan, but she has adhered to socialist and egalitarian principles all her life and, in May 2003, she joined the Worker Communist Party of Iraq (WCPI) in London.

Like many of those who opposed the Saddam Hussein regime, Houzan also stood against the US-led invasion, “Operation Iraqi Freedom,” in 2003. “I believe that the US and UK agenda was not to liberate people from dictators,” she says. “In fact, they helped Saddam to stay in power and oppress people. And now we see a government which is a puppet of the US, made up of so many little dictators, this time based on ethnic, sectarian, tribal and religious groups.”

Houzan foresaw the catastrophic consequences of the invasion for Iraqi civilians – especially women and children – who were already living in deprived circumstances because of the decade-long economic embargo. “I was six years old when war first came to Iraq,” Houzan recounts. “And it has never stopped since. In conflict situations, life cannot progress. I was a teenager during the Iraq-Iran war, and I finished my high school studies just after the general uprising against the regime in 1991. I am aware of the consequences war can have on the lives of people. Before this war even started, we already knew that the women and children of Iraq would be the first casualties.”

Today, Houzan’s work continues in London and Iraq, across Europe and the world, as she organizes events and conferences on women’s issues and promotes OWFI and its activities. “I wish that all women could determine the course of their own lives,” she reflects. “I wish that they could decide for themselves who to love or whether to get divorced. They have a right to act on their desires.” In the face of obstacles, she remains pragmatic, concluding that: “An essential step is to secure an independent income for women, even a small one. We should find some way to enable women to become autonomous. It is as simple as that.”  “Women should have freedom, voice, right to determine their own future, and they need to have political awareness about their own oppression and how to fight back.”

OWFI’s daily achievements inspire Houzan’s continued commitment to defending the human rights of ordinary people. “My hope is that the women and men of Iraq and Kurdistan will involve themselves in the struggle for equality. There has been so much injustice and oppression in Iraq, for such a long time. To fight it is almost an obligation,” she asserts. “This is how I became involved, and why I will always be.”