The Zigen Fund: Services for a floating population

On a dusky evening in spring, we travel to the northwestern outskirts of Beijing, where 400,000 of the 7 million Beijing-based migrant workers and their families reside. Our guide is the gracious Pat Yang, Founder and Director of The Zigen Fund, a non-profit organization (based in New York and Beijing) that strives to support grassroots development in China. We exit the subway station and, after a twenty minute walk, find ourselves in a different world, Dongxiaokou Village. Leaving a wide, paved sidewalk, we head down a narrow path lined with shacks. Stench from the garbage strewn along the sides of the unpaved roads hits us. Piles and piles of black, oil-slicked trash create a labyrinth—one can see the muddy mess the roads become after rainfall here.

We pass by a residence, outside which two children are playing, dashing between small mountains of recyclable bottles and cans. Ms. Yang tells us that, of the 19 million people in Beijing, about one third are migrant workers, and most of these migrants work in the service industry or collect recyclables (whereas, in Southwestern China, many millions of workers are employed in factories). Dongxiaokou Village is what Ms. Yang calls a “slum area”—a severely overcrowded area in which several families are often obliged to share one room, and an area in which houses are built one on top of another. For these families, there is no reliable heating, no electricity to light the roads, and no sewage system. Slum residents have no access to basic public services, such as paved roads, running water, and sanitation.

The living conditions are shocking, and yet pockets of devastating poverty like this exist in many areas on the outskirts of Beijing. The principal culprit has been the rapid industrialization of Beijing proper—a metropolis that continues to expand, amoeboid, on a massive scale. In fact, Dongxiaokou is a conglomeration of four erstwhile farming villages: as the city expanded, the village farmers seized the opportunity to sell their houses to people who then proceeded to rent out rooms to migrant workers. And things keep changing. Ms. Yang tells us that, over the next six months, Dongxiaokou Village will be demolished to make room for further real estate development. No one knows where the migrant workers and their families, many of whom have lived in this area for a dozen years, will find refuge when the demolition happens. 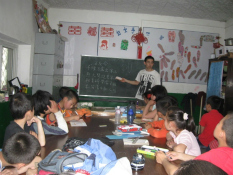 Pat Yang set up the Zigen Fund in 1988 in an endeavour (shared with her friends in New York) to promote children’s education in rural China. Then, as migrant workers moved from rural to urban settings throughout the 1980s, so did the Zigen Fund—expanding its services to meet the needs of migrant communities in the cities. Zigen now has a comprehensive development plan, including rural education initiatives, village-based women’s centers, adult education, primary healthcare monitoring, and environmental protection programs.

The Zigen Dongxiaokou Community Activity Center offers engaging programs targeted at the children of migrant workers and serves as an after-school and care-taking center. It has a small library with a reading program, plus movie showings in the evenings. The Center integrates teaching assistance, weekend tutoring, and health and environmental education. 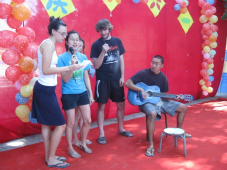 In a neighboring township, the Zigen Fund has founded another community center which offers comparable services to adult migrant workers. One small room is filled with Chinese children’s books, and an adjacent larger room is reserved for activities and movies. As one of the volunteers notes, there is a critical need for after-school and after-work activities for the migrant community, especially during the extreme Beijing summers and winters, when the harsh weather and inadequate housing conditions render at-home activities unthinkable. The center allows migrant workers to gather to play games and watch movies, and gives them space to sing together and put on performances. 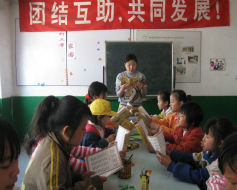 The vital importance of Zigen’s presence in the lives of these families is illuminated when one considers the quality of education available to migrant children at the two locally-organized migrant schools in the community: these schools contain barrack-like classrooms, offering basic education up to grade six. The teachers are, themselves, rural migrants who are poorly educated, paid a very low salary, and provided with little or no training. Unsurprisingly, the turnover rate among teachers is high. But these schools are the only option available to the children living in the area. Migrant children do not hold Beijing hukou—the Chinese system of “household registration”, which is assigned to an individual at birth and follows that individual throughout life, determining his or her access to social services such as health care and public education, the quality of which depends on where a person is born and where he or she resides. Thus, when a migrant child becomes old enough to enroll in middle school, his or her family must decide whether to send the child back to the rural village of birth to continue the child’s education or to keep the child in Beijing with his or her parents, thereby limiting the child’s access to further education (owing to his or her rural hukou). 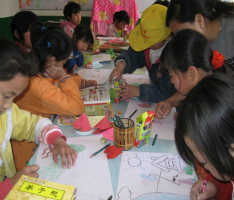 Fortunately for the children who attend Zigen’s two-room community center, the volunteers who work here are tremendously dedicated and passionate. There is one recent graduate from China Agricultural University and two volunteers from Taiwan. Together, they organize events and reading groups, while also providing homework help and mentoring.

Guan Pei, a graduate from China Agricultural University, became aware of the Zigen Fund when he was a college student volunteering on its various projects. He is now a full-time, live-in employee living off a small salary. Guan Pei has worked at the community center for one year, and will stay on for one more—“at least,” he says. “We are learning from each other—the children, the other volunteers, the parents, and myself,” he says, with great modesty. 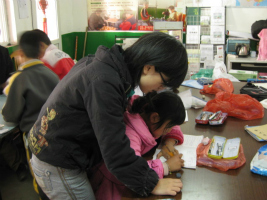 Lin Hui Zheng, a woman in her thirties, is another volunteer here. Funded by a Taiwanese NGO, she will be staying at the Community Activity Center for half of the year, and in the countryside for the remaining time. In her opinion, the biggest challenge facing the children of the migrant community arises during their transition from primary to middle school: the juncture at which they must make the decision whether to return to their rural birthplaces and continue their education, or to stay in Beijing, giving up the chance for a decent education and facing the prospect of becoming migrant workers themselves. Ms. Lin has observed that, during this transitional period, the children become more closed off and less confident. The children are, naturally, nervous about establishing close personal relationships as they are aware that there is a lot of upheaval within their communities, with other children constantly coming and going.

At the center we meet another gregarious and enthusiastic volunteer, Mr. Wu, who is in his sixties. After working for 30 years in the court system of Taipei, Mr. Wu has recently retired and has begun a Master’s degree in social development while interning at the Zigen Fund. Mr. Wu’s current living space consists of a rented room with a mattress on the floor, a desk, and a “bathroom” area—a sink and a hole in the ground. There is no toilet. Mr. Wu has been helping out at Zigen’s center for three weeks, and is planning to stay for another six. In his opinion: “Even though the resources are few, work still flows smoothly [at the center].” He emphasizes that the government needs to reach out to the migrant community and contribute resources to this floating population. As a law expert, Mr. Wu is interested in migrant labor rights and labor disputes. “There is a large disparity between what the law says,” he observes, “and what is actually implemented.” Given that there are 240 million migrant workers in mainland China, the government will eventually—Mr. Wu believes—have to raise the salaries of migrant workers across the country.

Meanwhile, the Zigen Fund continues to work to improve the lives of the migrant workers and children who come to its center.  Zigen’s most dire challenge is the lack of funding necessary to develop infrastructure and sustain the salaries of its employees. The Zigen Fund is not currently lacking in staff, as volunteers regularly come from surrounding Beijing universities to offer their support, but physical conditions at the two-room community center are stark. In order to better serve the people of its community, Zigen needs a larger space and improved amenities—a working toilet, for instance.

Our experience in Dongxiaokou Village was unforgettable. It underscored the severe realities of life in the Beijing area’s slums, but also illuminated the indefatigable and inspiring work of the Zigen Fund to help educate and mentor migrant workers and their children, creating healthier lives and brighter futures.