W4 interviews photojournalist, Vlad Sokhin, on his latest documentary project “Crying Meri: Violence against women in Papua New Guinea”. Our editor-in-chief would like to alert readers that the following piece contains material that may be upsetting. 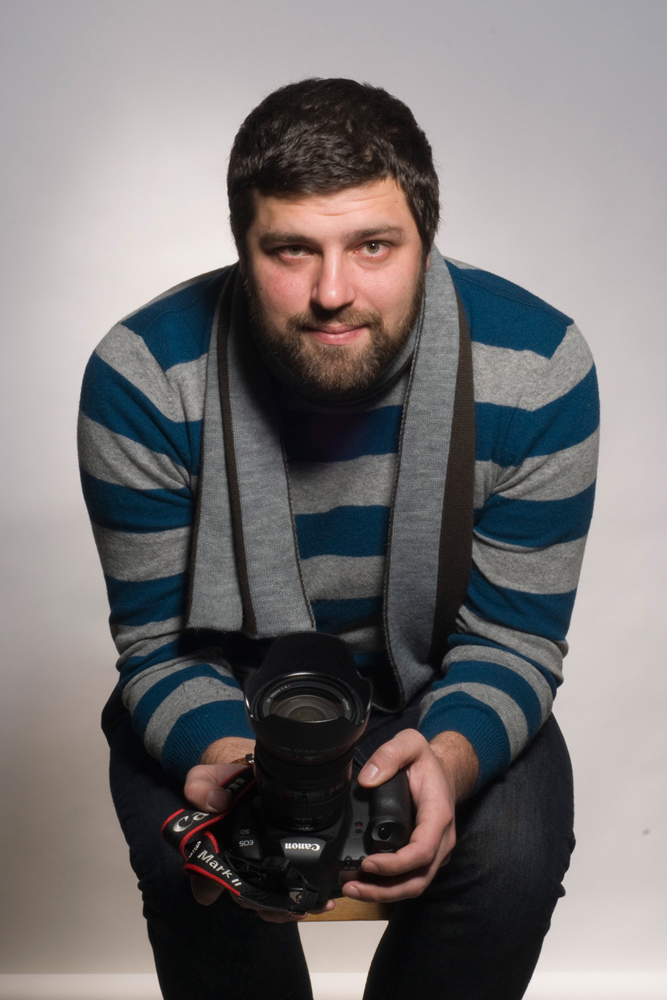 At the height of the financial crisis in 2008, Vlad Sokhin lost his job as a tour guide in Thailand, forcing him to pack his belongings and return to his home in Lisbon, Portugal. Searching for new ways to make a living, Vlad turned to his wife for guidance. Her response was brief and pragmatic: “You’re always carrying your camera around your neck and photographing things, start making money with it!”

Fast-forward four years, and Vlad is now a photojournalist, with a portfolio spanning from Africa to the exotic islands of the Pacific Ocean. His latest photo-documentary project, “Crying Meri,” aims to expose the issue of violence against women in Papua New Guinea.

Following her fact-finding mission to the country earlier this year, the UN Special Rapporteur on violence against women, Rashida Manjoo, explained that “violence against women is a pervasive phenomenon in Papua New Guinea, with a wide range of manifestations occurring in the home, the community and institutional settings {…} Domestic violence is socially perceived as a normal aspect of a woman’s life and a family matter that should not be discussed publicly.”

Vlad believes that patriarchal cultural traditions and beliefs are reinforcing and perpetuating the phenomenon: “For example, men believe that after they have paid a ‘bride price’ – as part of a local wedding tradition in which the groom’s family pays a sum of money to the bride’s parents – they fully possess their ‘meri’ (Pidgin English for ‘woman’) and they treat her the way in which they would treat a purchased vehicle.” 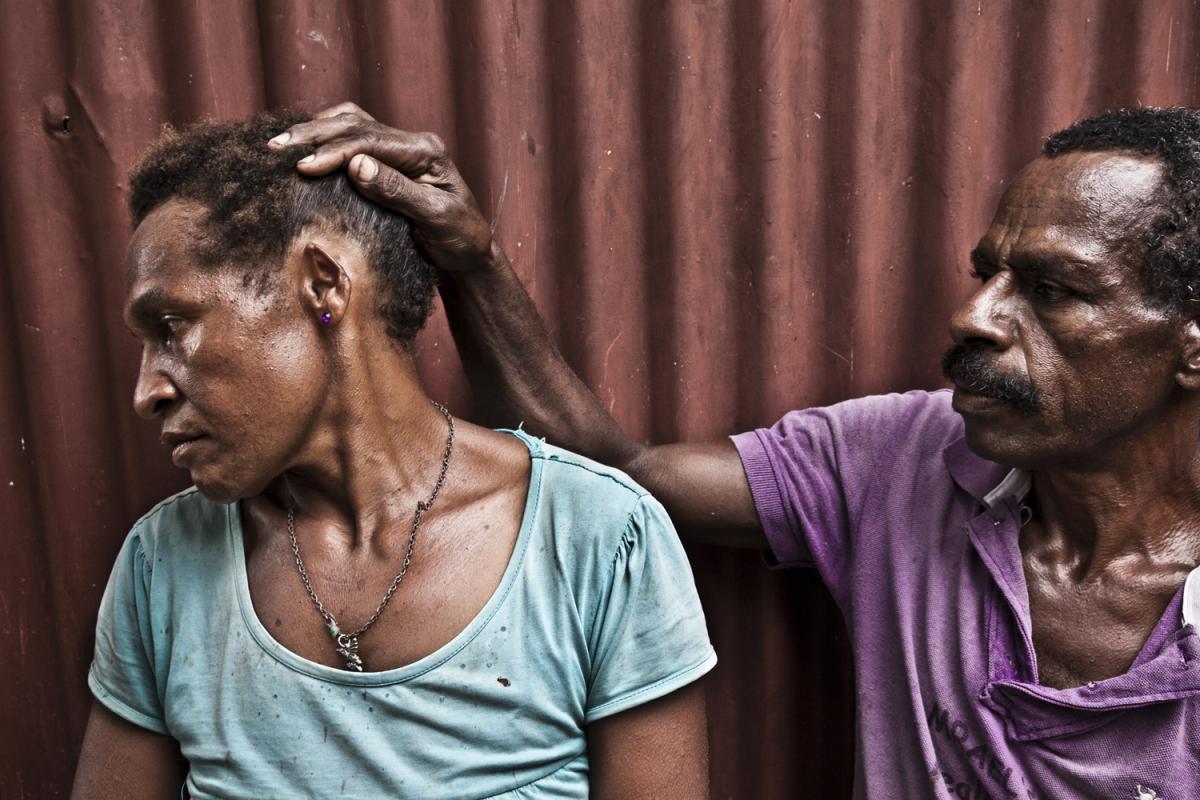 As is the case in most countries, domestic violence is seldom openly discussed in Papua New Guinea. “Crying Meri” aims to break this silence. In a recent interview with W4, Vlad discussed his experience documenting the issue in both the urban and rural regions of Papua New Guinea, and talked about the steps being taken to eradicate this tragic phenomenon.

During his time in the country’s urban hubs of Port Moresby, Lae and Mount Hagen, Vlad also became aware of pervasive gang-related violence against women. These urban gangs (or “Raskols”, as they are known locally) often consider the rape of a woman as a rite of passage or initiation for their new members. Vlad’s meetings with both perpetrators and survivors uncovered a possible underreporting by women survivors, likely due to their fear of retaliation, as well as a lack of faith in the ability of the authorities to respond effectively:

“I managed to meet with Peter Moses, the leader of the Dirty Dons 585 gang, and his ‘boys’ {or ‘Raskols’}. He told me that he committed his first rape when he joined the gang more than ten years ago and that, since, he has raped over 30 women, three of whom were also killed. Each of the young Raskols admitted to sexually assaulting more than one woman, none of whom they said reported the incident to the police. But, according to the rape victims I met in hospitals and police stations, they often do report. However, such cases very rarely go to court due to many factors, one of which is corrupt policemen, who accept bribes from perpetrators. Most women lack the financial means to offer such bribes.”

During his visits to some of Papua New Guinea’s remote rural areas, Vlad discovered that in some villages women are at risk of being attacked due to a suspicion of ‘puri-puri’ (or black magic), a power usually attributed to women. Vlad shared with W4 the story of one woman who survived such an attack: 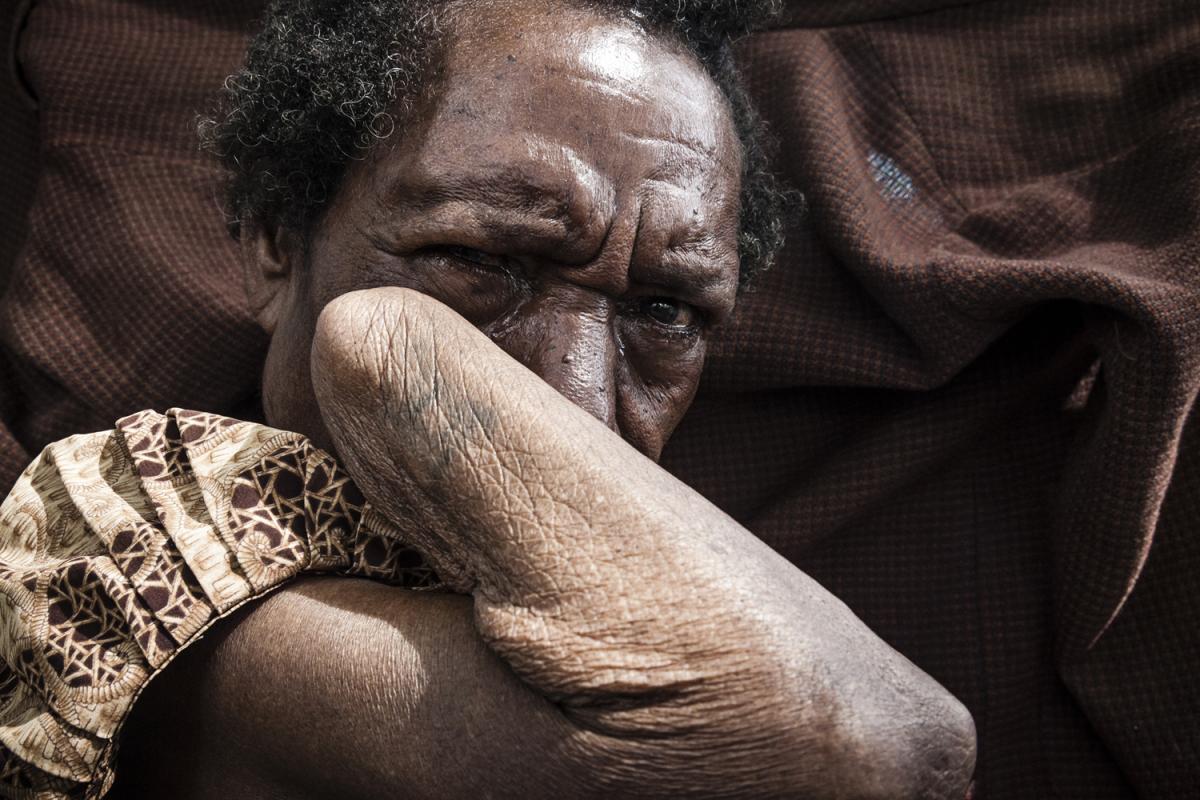 “60-year-old Rasta Tuwa was accused of being a witch by the people in her village after the death of a young man in 2003. As the villagers gathered for the young man’s funeral, the crowd ambushed Rasta, beating and strangling her while wielding axes, bush knives and wooden sticks. In her attempt to escape, Rasta ran into her house, where she was confronted by an attacker. He swung his bush knife, hoping to decapitate her, but missed Rasta’s head, amputating her arm instead. Rasta survived the attack but only after fleeing much of her family and home for good.”

In light of his experience, Vlad considers it urgent that specialized medical, legal and economic support be provided for the survivors of such brutality: “Many of the survivors are disabled for life. Most of them have no place to live. {…} I think hospital treatment, for example, should be free for these women. In a country where most people in rural areas make 30-40 kina a month (around 15-20 USD), I don’t see how these women actually manage to pay hundreds of kina in hospital fees. Without the financial support of friends and relatives, survivors would suffer a lot more. But not all family members have the courage and resources to provide the necessary support. Often, relatives don’t want to support these women, because they are afraid of possible consequences of helping a so-called ‘witch’.” 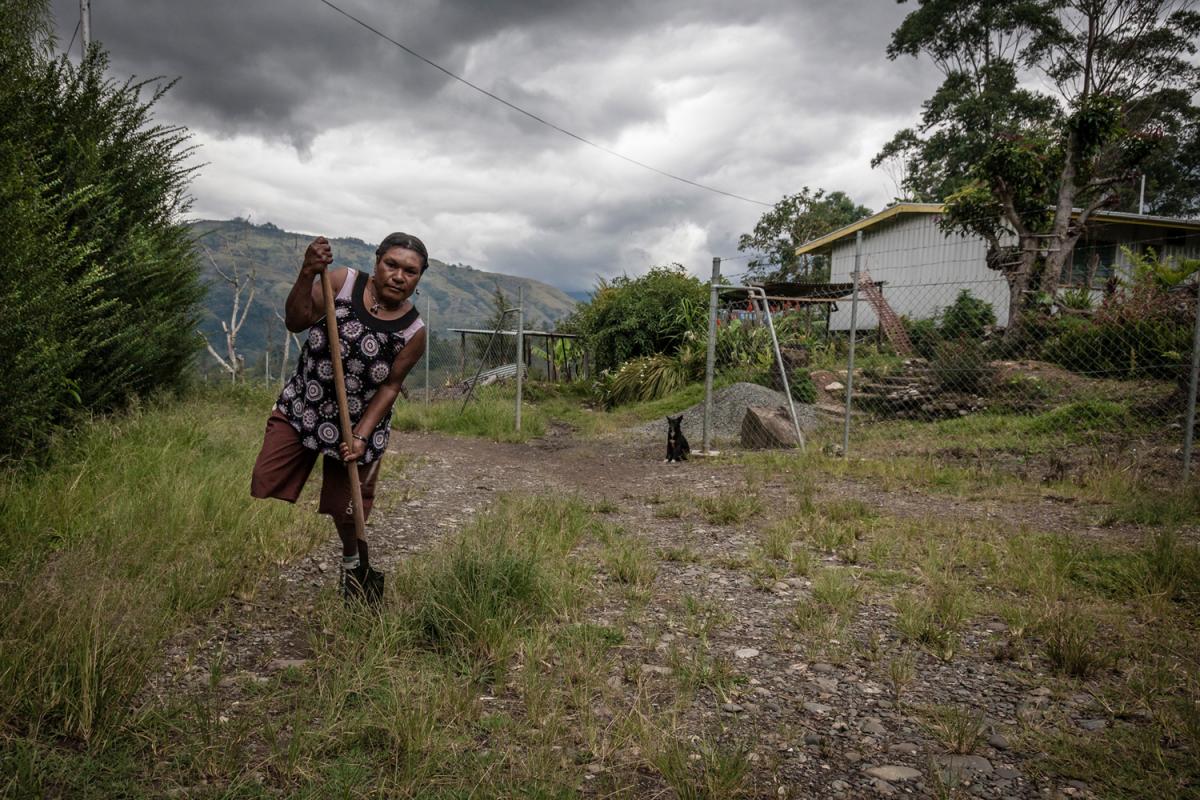 While Vlad is skeptical about the will and capacity of Papua New Guinea’s government to adopt adequate measures to support survivors, he did find some organizations working to respond to the issue of violence against women, including the City Mission, which offers shelter to women survivors of assault, along with the Family Support Center of Port Moresby’s General Hospital, WeCare – The Foundation for Women and Children at Risk, Medecins Sans Frontieres, Amnesty International, and the United Nations. However, Vlad was particularly touched by the unwavering commitment of local volunteers:

“Other than NGOs, there were some incredible volunteers helping the victims.  Monica Paulus, a human rights advocate from Kundiawa town in Simbu province, is an example. Monica set up a temporary shelter for assaulted women in her own house. I worked with Monica for four days and during that time she stayed at friends’ houses, giving up her own bed to women survivors of violence.”

However gradual and difficult progress may be, the work of these organizations and devoted volunteers is indeed leading to some positive changes in the region: 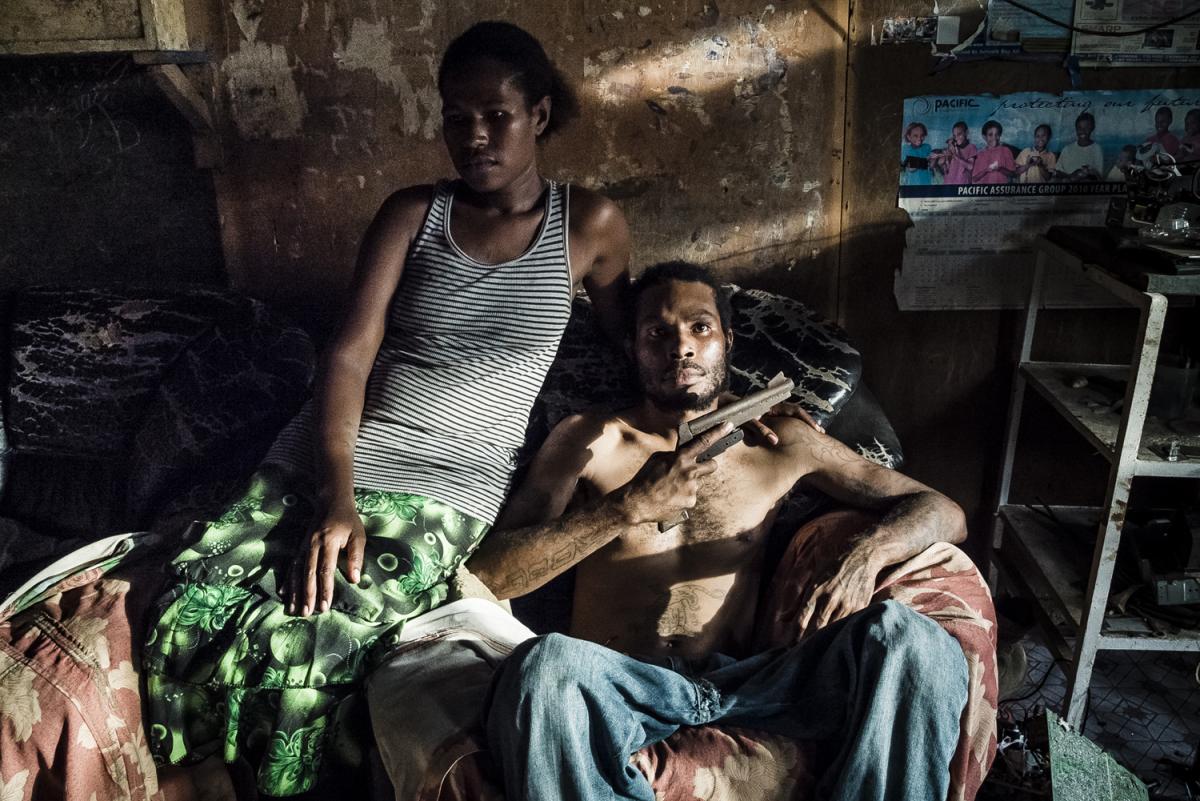 “During my time in the Kaugeri settlement, the most dangerous area of Port Moresby, I happened upon 31-year-old Omsy Evo’o Koivi, a member of the famous “Kips Kaboni” {or “Red Devils”} Raskol gang. In 2004, Australian photographer Stephen Dupont featured the gang in his amazing project entitled “Raskols”. He set up a makeshift studio in Kaugeri and produced a series of portraits of gangsters. Omsy was one of them and his photo was the opening picture of Dupont’s project. Eight years later, I found that Omsy had left his gang activities behind him to become a bass guitarist. His band “Amua Durupu” has won international awards. Omsy told me that during his ‘raskol’ life he had raped five women and would threaten his wife Carol at gun- and knife-point. After leaving the gang, he stopped abusing Carol. He admitted to holding on to his handmade gun for his family’s protection and requested to be photographed with his wife holding this gun. They both seemed to live very happily together now.”

Vlad is currently in Papua New Guinea continuing his work on his “Crying Meri” project, which was recently adopted by the United Nations for use in a national educational campaign aimed at combating the issue of violence against women. The project was displayed this month in Port Moresby during the Human Rights Film Festival and is now on exhibition across Papua New Guinea.