“Cooperatives are a reminder to the international community that it is possible to pursue both economic viability and social responsibility.”
United Nations Secretary-General Ban Ki-moon 3 July 2010

According to the International Co-operative Alliance, cooperatives can be thanked for the creation of more than 100 million jobs worldwide.  Women’s Worldwide Web celebrates International Day of Cooperatives, recognizing that cooperatives, as member-owned and people-oriented businesses, provide crucial economic opportunities, particularly for women, allowing them to support themselves, provide for their families and contribute to the overall socioeconomic development of their larger communities. 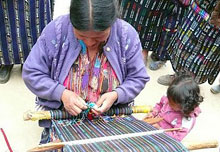 Nest is a non-profit organization that has created an innovative approach to supporting women’s cooperatives throughout the world, establishing connections between female artisans in Guatemala, Morocco, Togo, Dominican Republic, Kenya, India and the United States. Nest has coined its unique method as ‘micro-bartering’: after partnering with cooperatives and providing poor women with interest-free loans for purchasing materials, workspace or training, Nest asks that the women repay their loans with merchandise instead of money. Nest then markets and sells the artisans’ products in the United States through fundraisers, retail stores, trunk shows, online stores and other media. The organization also offers essential business education, including lessons in marketing, finance, pricing and environmentally-friendly production processes. By way of micro-loans, mentoring and education, Nest empowers women to reach their fullest potential while also working to preserve their native craft traditions.

Kathleen Wright, Director of Sales and Marketing at Nest, explains:

The theme for this year’s International Day of Cooperatives is “Youth, the future of cooperative enterprise”—designed to illustrate the success of cooperatives in empowering youth as well as fostering increased inter-generational understanding and solidarity. 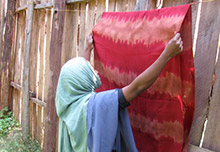 Given this year’s youth-oriented theme, Women’s Worldwide Web would like to spotlight the Maisha Collective. This Kenya-based cooperative (a partner of Nest) is run by young women refugees from the Dominican Republic, Congo, Somalia, Ethiopia, Sudan and Burundi who design, fabricate and sell a line of tie-dyed scarves. The cooperative serves not only as a source of income and opportunity for economic empowerment for these young women survivors, but also as a community-based support system. In response to the challenge of a lack of accessible childcare for the women while at work—a hugely important issue for young working mothers across the globe—all the members of the cooperative agreed to donate a portion of their salaries to the funding of group childcare for themselves and their colleagues.

“Maisha truly is a collective in which all members support each other for the greater good of the group,” as Sasha Feldstein, a contributing author to the Maisha Collective blog explains.

The Maisha Collective is only one of numerous other women’s cooperatives that Nest supports in its operations, allowing women around the world to become powerful advocates for positive social change. As Kathleen Wright says: “Across all of the countries in which we work, women are seeing what they’re capable of, they have confidence that the sky is the limit for their businesses—they see that someone has faith in them and they have faith in each other. You can see a growing glimmer of confidence in their eyes, from the first time we visit them to the moment they begin to see their businesses become successful.”

The United Nations has designated next year as the International Year of Cooperatives and affirms that “cooperatives, in their various forms, promote the fullest possible participation in the economic and social development of all people, including women, youth, older persons, persons with disabilities and indigenous peoples, are becoming a major factor of economic and social development, and contribute to the eradication of poverty.”