Prevent conflict from interrupting the schooling of syrian refugee children

Prevent conflict from interrupting the schooling of syrian refugee children 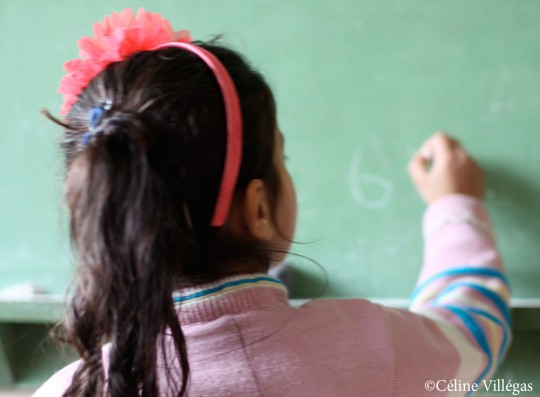 The armed conflict in Syria has persisted for over 4 years, forcing 10 million people to flee their homes. It’s estimated that there are now 6.5 million internally displaced persons in Syria and 4 million refugees who have crossed the borders into neighbouring countries. A large proportion of these refugees are children.

Every day, thousands of Syrian refugee children arrive in neighbouring Lebanon, a country whose education system is already greatly under-resourced. Today, there are more than 500,000 school-aged Syrian refugee children living in Lebanon, most of whom do not have access to education (formal or informal). We must act as quickly as possible to ensure that these children do not become part of a lost generation and are instead educated to become active citizens of the future.

W4’s Field Partner in Lebanon Yalla! Pour les Enfants works to defend Syrian refugee children’s human right to an education. The team works to get Syrian children who have been taken out of school as a result of the conflict back into education. The program also participates in community conflict prevention and peace building between different ethnic and religious groups as well as between the refugee populations and host communities in Lebanon.

Yalla! opened  a first school for Syrian refugee children in the Karam Zeitoun neighbourhood in Beirut in 2014, providing adapted education to help Syrian children achieve an educational level that would permit them to access the formal Lebanese education system. This program has been very successful; all of the children who attended the school have had the opportunity to successfully integrate into the Lebanese education system. Thanks to the generosity of W4 donors, in October 2014 a second school was opened in Aley, a village on Mount Lebanon, 20 km from Beirut.

-    The creation of an informal school for Syrian refugee children in Aley. Each year, the classes accommodate around 200 children who would otherwise have no access to education.

-    The integration of school-aged refugees into the Lebanese education system. The education that Yalla! provides not only increases the children’s levels of education but also, above all, helps them to rediscover a taste for school and gain the confidence necessary to continue with their education.

-    The organisation of fun activities for both Syrian and Lebanese children. These shared moments contribute to the development and integration of refugee children and to inter-communityl dialogue.

When you donate to support Yalla!, you give 200 children access to a quality education, adapted to their needs, in a safe environment. Thanks to the teaching methods that Yalla! employs, the children rediscover their love for school and gain the confidence to reintegrate into education. You help to reduce the risk that these children will become victim to a vicious cycle of begging on the streets and violence.

Your caring support also allows the children’s parents a few hours of freedom to work or, in many cases, to search for a job or complete essential administrative processes relating to their refugee status and application for humanitarian aid.

Your participation contributes to peace building between host communities and refugees, allowing for greater acceptance and understanding between them.

Your help can renew hope among and bring a smile back to the faces of refugee children. Thanks to you, children can overcome trauma and learn how to be children again: free to learn, to play, to make mistakes (small ones, that is!)…

Join us in providing vital educational opportunities for Syrian refugee children so that they are not “a lost generation”.

“Happiness is when what you think, what you say, and what you do are in harmony.” ? Mahatma Gandhi. If you think children should go to school, you can help them easily by supporting a beautiful educa

We can't go on pretending day by day / That someone, somewhere will soon make a change

For Ben and Laura's wedding

I can't keep seeing the faces of these precious children on the news and do nothing. Until we find a sustainable solution to the refugee crisis, I'm happy to make a small contribution to help ensure t

Keep up the fantastic work!!

For Ben and Laura's wedding - with pleasure and admiration