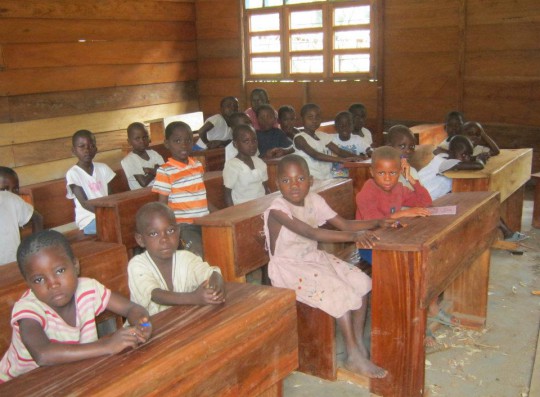 The children of Goma, the capital of North Kivu province in eastern DR Congo, have suffered through more than a decade of ethnic conflict and are now plagued by the area’s subsequent poverty. Either orphaned by the death of their parents or abandoned by families too poor to care for them, an estimated 8.4 million children have been left to fend for themselves across the country. Traditionally, extended family members have assumed the role of caring for the orphaned, but the extremity of violence in the region has gradually eroded these bonds of solidarity. Of these abandoned children, approximately 50,000 have ended up on the streets begging or resorting to prostitution.

Many girl orphans forced to live on the streets fall prey to sexual assault, drug use and jail time, and for the majority of them education offers the only chance of a way out. However, many have either never been to school or were forced to drop out very early because of the armed conflict.

The Furahini Center for Education, run by W4’s field project, the Alpha Ujuvi Collective, offers an education program for these impoverished and vulnerable girls—whether they are orphans, street children, or refugees—coupled with vital social reintegration services. The center thus enables the girls to catch up on schooling that they have missed as a result of war, displacement, family difficulties or natural disasters. Moreover, the program enables the girls to finish their primary education in only three years–half the time it takes on average!

Empower a girl in Goma by funding her school fees, purchasing her uniform, or offering her food aid. Help her to turn over a new leaf, to reintegrate into society and pursue her right to a dignified childhood free from the dangers of poverty and violence.