ENGAGING YOUNG MEN TO COMBAT VIOLENCE AGAINST WOMEN IN INDIA

ENGAGING YOUNG MEN TO COMBAT VIOLENCE AGAINST WOMEN IN INDIA 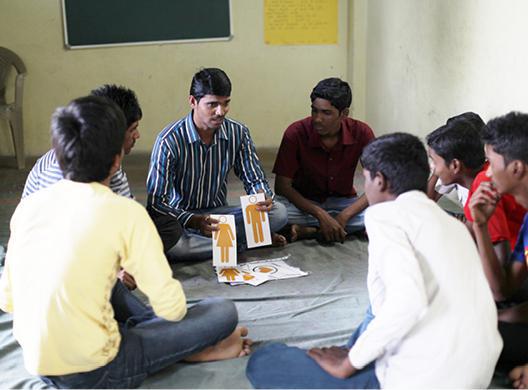 Violence against women and gender discrimination are being combatted from within India’s urban slums through an innovative program that engages men as advocates of gender equality.

Violence against women is pandemic in India. The highly-mediatized, fatal gang rape of a young Indian student in December 2012 was far from an isolated event: 244,270 violent crimes against women were reported across India last year. Among these crimes are rape, kidnapping, sexual harassment, trafficking, and molestation—and then there are the ravages of cruelty on the part of husbands and relatives, and dowry-related suicide.

In addition to this violence, Indian women suffer broader and more prevalent forms of gender discrimination, undermining women’s access to basic human and civil rights such as education, sanitation and healthcare, and creating a barrier to meeting India’s MDG3 goal by 2015. Men’s attitudes and behaviors lie at the root of the problem. And yet, men remain largely absent from efforts to find solutions.

W4’s field project, Equal Community Foundation, is working to prevent violence and discrimination against women by changing the way that boys and young men in India are raised and by giving every man the opportunity to learn and practice gender equitable behavior.

ECF’s grassroots program, Action for Equality (AFE), works with young men, between 13-17 years of age, who come from low-income communities. The program aims to equip these young men with the knowledge, tools, peer support, and leadership skills that they need to manage and improve their own behavior while also advocating for positive behavioral changes among other men and women in their communities.

Action for Equality produces successive batches of young leaders who work with influential groups of parents, teachers, and media so that the community can raise men differently and eradicate violence and discrimination against women.

To date, ECF has worked with more than 4000 boys and young men.

As a result of the intervention :

Meet Mehul: Mehul is 17 years old and has been a part of the Action for Equality program for almost a year. He is continually developing his attitude and behavior towards the women in his life. Mehul is one of the program’s most active volunteer leaders. In the last year, with the help of mentors and peers, Mehul has facilitated events in his community aimed at raising awareness of such issues as girls’ education, women’s access to employment opportunities, street harassment of women, and the harmful consequences of the dowry system.

However, young men like Mehul cannot succeed by themselves. They need your support as they make their journey of positive change. Your contribution can ensure that, every year, another 600 men like Mehul will have the opportunity to adopt gender-equitable behavior. You can help them guarantee that one day the women in their communities and beyond will not suffer violence and discrimination at the hands of the men in their lives.

Respect women as one would their own mother or sister

So glad this project recognizes that men must be as invested as women in ending violence against women.

Bravo on the work you have been doing with boys and men. I firmly believe that various education programs need to be for both men and women so we all understand the impact of our actions and inaction

Awareness and education are the primary tools that will help end violence against women. I wish W4 and Equal Community Foundation success in their efforts.

Thank you for leading this task, this will surely make lasting impacts on some lives.

I read about this wonderful organization in an NPR article this morning. This is exactly the type of work that needs to happen to make India and the rest of the world a safer place for women. Thank

Thank you for your work on such an important issue.

Heard the story on NPR this morning, keep up the good work

Happy to help a project that is attacking the problem at its roots, the values of the young men of the society.

Such important work for every part of the community.

ECF is doing very important work. I feel pleased and proud both. Good luck to you!

Crucial to combating violence against women!