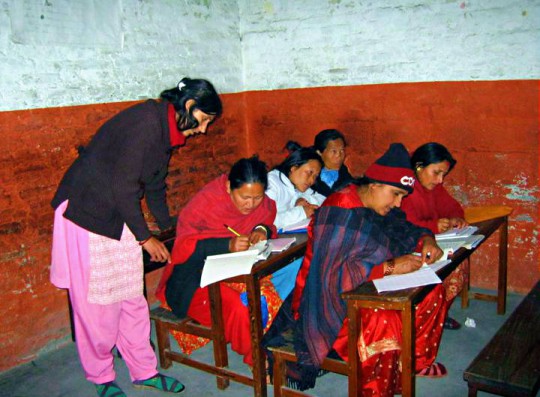 Since the end of civil war in 2006, Nepal has been working hard to revive crucial development efforts that were halted by a decade of bloody conflict. Nonetheless, almost a quarter of Nepalese are still trying to live on less than $1.25 (PPP) a day and those living in rural areas, some 80% of the country’s population, struggle under the harshest of conditions to meet their most basic needs.

Nepal is one of the world’s primary source countries for forced labor and sex trafficking. Without access to education, Nepal’s rural girls and women risk becoming victims of both human trafficking and gender-based violence.  Education is the key to their protection – the threat of violence noticeably diminishes as a woman’s level of education increases. For example, 53% of illiterate women in Nepal report experiencing violence in their lifetimes compared to 39% of women who have obtained their school-leaving certificate (SLC) or higher levels of education.

W4’s field program RUWON Nepal has, for two years now, been running a school for illiterate women living in the Saraswati Nagar and Kapan villages of Nepal’s rural Kathmandu district. For two hours a day, six days a week, the school offers women of all ages free courses in Nepali, Math and English. Divided into five classes, 40 women are currently benefiting from a life-changing education thanks, in large part, to a team of dedicated volunteer teachers.

Today, the school is striving to enroll a greater number of rural women, but it lacks the financial means to make this crucial expansion.  However, by donating 60 Euros, you can sponsor a woman’s education for an entire year! Your gift will provide her with the precious resources of pens, paper and exercise books, enabling her to embark on her educational journey, which will equip her with the knowledge and self-awareness she needs to improve her life prospects.

Empowered with this knowledge, she will also be more likely to send her own daughters to school, protecting the next generation from the dangers of human trafficking and violence.

You can be a changemaker!

Wonder Women of the