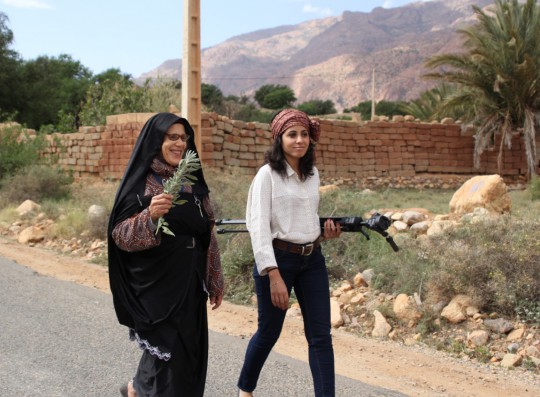 Muslim women are faced with the two-fold stigma of being women and being Muslim. They not only face prejudices surrounding Islam but, in order to be successful entrepreneurs, they must also conquer barriers within their own countries that prevent their full participation, as women, in the economy and society. Indeed, women represent only a quarter of the active population in the Middle East and North Africa regions (MENA) — the lowest rate of women’s participation in the world.

Further, while women account for nearly a third of entrepreneurs in OECD countries, only 15% of businesses in the MENA region are run by women. Indeed, women in Muslim countries continue to face persistent barriers to the launch and growth of their businesses, including a lack of access to financing, information and support services as well as discriminatory socio-cultural norms.

The “Women SenseTour - in Muslim countries” is a project with two crucial objectives: 1) to raise awareness on the issues surrounding women’s entrepreneurship in Muslim countries, while highlighting inspiring, creative, and empowered Muslim women role models and 2) to offer women entrepreneurs help in resolving any challenges related to their small businesses through the mobilization of a vast, international network of social entrepreneurs.

For 5 months and across 5 countries (Morocco, Tunisia, Turkey, Iran, and Indonesia), members of this network will meet with local women entrepreneurs and invite them to join in on practical, hands-on business workshops held within a women’s empowerment framework. These training sessions are oriented at helping the women to further develop their businesses through vital, in-kind support at various levels of management.

Additionally, in order to sensitize communities and societies on the importance of women’s social entrepreneurship, participants of the tour will also be filming a documentary that will tell the stories of several Muslim women entrepreneurs from the field. This documentary will highlight, for viewers worldwide, the imperative of combatting the harmful stereotypes that represent Muslim women as oppressed, idle and submissive while spotlighting the social and economic benefits of women’s entrepreneurship.

Thanks to workshops organized by a network of social entrepreneurs, Muslim women entrepreneurs can benefit from expertise on a variety of topics, ranging from marketing to accounting, from elaborating a business plan to developing a communications strategy. These training sessions will enable the women to acquire essential skills for expanding their businesses.

The field-based documentary, set to be produced, will raise awareness on the situation of Muslim women entrepreneurs, deconstructing stereotypes and, crucially, amplifying the women’s voices. Theirs are voices of strength and testimonies to Muslim women’s ability to take on the key role of job creators in a region plagued by unemployment, sparking positive change for future generations.

Join us as we embark on the “Women SenseTour - in Muslim countries”. You can support the creativity, commitment and courage of these women entrepreneurs in sustainably advancing Muslim women’s status and the socioeconomic development of their countries and region.